The Guardian is the media outlet of choice for the alarmists who are becoming more hysterical and outrageous in their pronouncements. The latest article, following hot on the heels of Readfearn’s latest bit of rubbish is by SKS (Skeptical Science) regulars, Abrahams and Nuccitelli.

This article is mendacious. It purports to show that the science supporting man made global warming (AGW) is firming and does so by discussing 3 new important papers.

The third paper by Sherwood is junk and is critiqued here.

The other 2 papers discussed by A&N deal with 2 alternative theories to explain the slight warming the globe has had since 1850 and show that these alternatives are inadequate.

The first alternative theory is natural variation. Natural variation [NV] is the cooling and warming which climate history abounds in. AGW strives to show that what is happening today is outside the parameters of what could be expected from NV and therefore AGW must be responsible.

The paper A&N have selected to disprove NV is by Imbers et al. Like all AGW papers this one is based on modelling and even the authors conclude their theory is not fool-proof by suggesting:

that a wider variety of robustness tests, other than simple comparisons of residual variance, should be performed when dealing with other climate variables and/or different spatial scales.

Alarmists have thought they were on a good thing in rebutting NV ever since McLean et al was published. McLean detrended the temperature record and sought to show what remained was dominated by NV and not AGW. McLean was fiercely attacked by alarmists, particularly Grant Foster, a blogger who had a ‘rebuttal’ published in record time.

McLean et al were not permitted a right of reply but still published their response to Foster et al’s criticism along with some of the emails between the authors of Foster et al. The emails are especially revealing in indicating the political and ideological corruption of the peer review process and the treatment of skeptical papers. Here are 3 of the emails:

“Having now read the paper [McLean et al., 2009] in a moment of peace and quiet, there
are a few things to bear in mind. The authors of the original will have a right of reply, soneed to ensure that they don't have anything to come back on.”Phil Jones to Jim Salinger, July 28, 2009

“But as it is written, the current paper [Foster et al. draft critique] almost stoops to the
level of "blog diatribe". The current paper does not read like a peer-reviewed journalarticle. The tone is sometimes dramatic and sometimes accusatory. It is inconsistent withthe language one normally encounters in the objectively-based, peer-reviewed literature.”

“Incidentally I gave a copy [of the Foster et al. critique] to Mike McPhaden and discussed
it with him last week when we were together at the OceanObs'09 conference. Mike isPresident of AGU. Basically this is an acceptance with a couple of suggestions for extras,and some suggestions for toning down the rhetoric. I had already tried that a bit. Myreaction is that the main thing is to expedite this.”Kevin Trenberth to Grant Foster, September 28, 2009

These emails clearly show that the peer review system is neither honest nor conducive to honest and transparent science.

The basic issue of McLean et al was whether NV could supply a temperature trend. Foster et al disputed this:

Consequently, their estimates are at marked variance with essentially every other study of the connection between ENSO and large‐scale temperature variability, particularly with regard to the role of ENSO in any long‐term warming trends.

This is demonstrably incorrect: 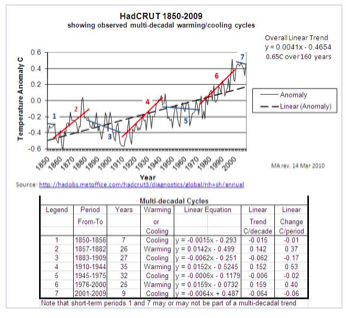 As can be seen NV from 1850 due to ENSO strongly shows asymmetry. Asymmetry is well documented with many peer reviewed papers. Asymmetry can be in duration or intensity.
Duration refers to the relative times that either the warm part of ENSO, or El Nino, or the cool part, La Nina, dominate. During the 20thC there were more El Ninos than La Ninas so automatically a warming trend would be created by the greater number of El Ninos.

This basic fact is ignored by the alarmists and in particular A&N who are part of the advocacy of SKS.

A&N have also ignored the great number of peer reviewed papers which show that NV is either greater than AGW or sufficient in itself to explain temperature trends. See here, here, here, here and here.

Equally important it is now clear that McLean’s thesis about the role of the Southern Oscillation Index [SOI] has been vindicated.

There are a number of ways of lying. One is subreption, omitting crucial facts. By not referring to all the contrary evidence to their point about NV being secondary to AGW A&N are guilty.

The 3rd paper referred to by A&N is by Schurer et al. This paper seeks to reduce the impact of the sun on climate during the 20thC. Again A&N have not referred to important contrary evidence, in this case what the IPCC says: 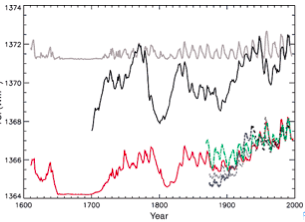 This is Figure 6.5 from the Third Assessment Report [TAR]. What it shows is the results from major studies of the Total Solar Irradiance [TSI]. TSI is the measure of solar irradiation reaching the Earth. Every study shows an increase during the 20thC correlating with the rise in temperature.

Figure 6.5 is confirmed by 2 studies. The first is by David Stockwell. Figures 4-7 show how an Accumulative TSI [CUMSOLAR] correlates with temperature as measured by all the major temperature indices. The CUMSOLAR is calculated by averaging TSI over a period. When the TSI is above average temperatures are found to be rising and vice-versa when TSI is below the average. The rate of rise or decrease in temperature is determined by whether the TSI is heading away or towards the average.

This elegant concept is valid for all time periods.

The second study is by Dr Glassman. Glassman’s research also shows a remarkable correlation between solar radiation and temperature:

In fact there is a remarkable amount of research being conducted into the effect of the Sun on climate with 71 new peer reviewed papers being published in 2013 alone.

All of this is ignored by AandN who focus in classic confirmation bias on the pitifully small amount of ‘research’ done to support their failed thesis of AGW. That each of their 3 papers is flawed merely adds to their failure and subterfuge.

Willful Stupidity of An American Leftard.

I sometimes wonder if the Warmists are dead stupid or are just so warped in their thinking that they cannot think straight. Take this piece posted by Popular Progressive:

‘It’s COLD Today, So Global Warming Is a Hoax!’

As certain as climate change is the eruption of know-nothings who challenge science every time it snows, led by Fox News, of course.

Barbara, I'll see you and raise you one: As certain as global warming alarmism is the eruption of pseudo-scientists who say "I told you so, whenever any tiny section of the world has a hot day!

However how stupid is it to come out with this statement:

The illustration above was photoshopped. It is similar to one used by Science magazine which was created by Science Magazine to illustrate a letter. And besides, Arctic ice is expanding.

Oh, Barbara! Why roll out the "97% of climate scientists" hogwash that has been shown to be false so many times.

So what comes next in this Willfully Stupid article:


In fact, the changes in our environment generate an increasing number of and more intense storms. Do folks believe that climate change will happen during lunch? And are they blind to the other manifestations of this phenomenon? Like super storms.

Barbara, the IPCC in their latest AR5 report has ruled out extreme weather events being caused by man-made climate change. But ignorance on this and many other matters does not stop the Barbara from pontificating on Popular Progressive.

Then, the willful stupidity rises up to a crescendo:


Next time you are confronted with a climate change skeptic, ask them these questions…

1. Why would scientists, whose very livelihood depends on finding facts and getting them right, intentionally make up global warming? It is in a scientist’s nature to get the facts correct, otherwise they would not have gone into that field. They would have instead grown up to be used car salesmen, Evangelical preachers making 7 figures, Fox News anchors, and Republican politicians.

2. 97% of scientists in the WORLD agree that man-made global warming is occurring. Is is sensible to think that they are all in on some grand conspiracy to convince the world that the earth is warming when it is not? What do they have to gain from it?

3. Why is it that the ONLY significant denial of climate change comes from ONE group of people in the entire world, that being of course Republicans in America? Would it not be prudent to think that they have much to gain by convincing as many people as possible that the scientists are wrong? Especially when the Democrats for the most part back the scientific findings.

Why would scientists, whose very livelihood depends on getting grants  for studying global warming intentionally reveal the doubts their science produce?  Their continuing income, like the used car salesman seeking his next sale, depends on getting their next grant. Independent Scientists, like the ones who wrote the alternative NIPCC report (Climate Change Reconsidered II: Physical Science), don't have  to pander to perplexed politicians.

Question 2 is the many times falsified fraudulent ficticious fabricated "97% of Climate Scientists" fallacy.  Surely Barbara knows this is false and is being willfully stupid.

Question 3 is so willfully stupid that it hardly bears an answer, however first, sceptics KNOW that climate changes, so I am sure they would not deny climate change. IS Barabara confusing climate change, a natural event and Anthropogenic Man Made Global Warming?

Are American Republicans the only group who question the falsified man-made global warming hypothesis?  How about the British? The Russians? The Chinese?

Wake up and smell the flowers, Barbara.

¶ The piece says: Barbara is a marketing expert who loves words, pilates and animals; it seems she has little knowledge of her chosen topic, climate science.