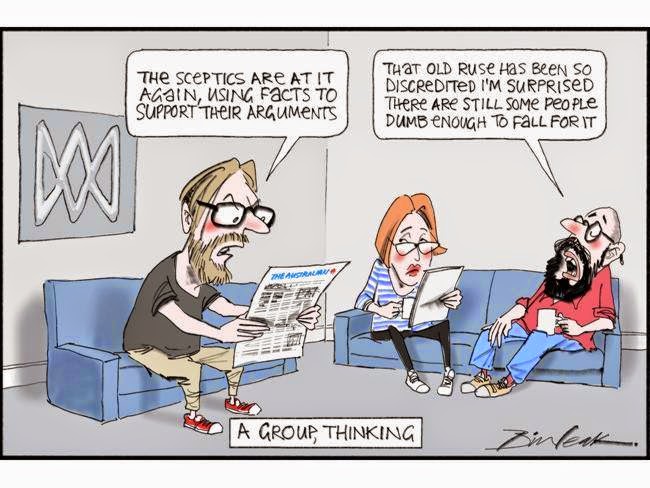 Dr Jennifer Marohasy has had a long running dialogue with David Jones of the Bureau of Meteorology, with many unanswered questions.

In January 2014, she questioned a statement that David Jones made in a radio interview:

In March 2014, Jennifer wrote an open letter to the Minister for the Environment, Greg Hunt, questioning the reliability of the bureau's data, beginning with (link)

and including this gem:


While the Australian taxpayer invested upward of $30 million dollars in just one supercomputer in March 2009 on the basis that this would make weather predictions more accurate, some individual forecasters, operating outside the mainstream climate-science community, and without any government support, are producing more reliable and accurate medium-term rainfall forecasts than the Bureau.


In arriving at theories that explain the natural world, the best scientists always use all the available data, not just the data that happens to fit a particular viewpoint. Furthermore, long historical data series are critical for statistical methods of rainfall forecasts, including the application of artificial neural networks that can currently provide more skillful forecasts than POAMA. That the Bureau persists with POAMA, while failing to disclose to the Australian public the absence of any measurable skill in its monthly and seasonal forecasts, should be of grave concern to the Australian parliament.

‘Facts don’t cease to exist because they are ignored.’

In June, Jen wrote again to the to the Minister for the Environment (link) containing details of her ongoing research with a letter concluding:


As an Australian scientist with a keen interest in public policy and temperature records, I ask you as the Minister ultimately responsible for the activities of the Australian Bureau of Meteorology, to consider how you might reconcile increasing atmospheric concentrations of carbon dioxide with a falling temperature trend, and what needs to be done if we are to adequately prepare as a nation for the possible onset of a period of sustained cooling.

Even if Minister Hunt has been taken in by the  Global Warming Hoax, he seems derelict in his duties if he has not called the head of the Bureau into his office with a "Please Explain."


Later in the year she published  a paper co-authored with John Abbott, Ken Stewart and David Stockwell titled

This paper considers the records for Bourke and Amberley and the methodology employed by the Bureau in compiling the annual statistics from such temperature series. We will also consider how NASA’s Goddard Institute for Space Studies (GISS) homogenizes data from Amberley in the development of its annual global mean temperature. Homogenization refers to a process of changing the actual temperature records using mathematical algorithms.


Taking the Warming out of Global Warming (Link)

The Environment Editor of the Australian, Graham Lloyd, picked up the story and exposed the fake data to the world in a series of articles, including

Where are we up to? As Jennifer has revealed on her blog today (link)

THE Australian Bureau of Meteorology now acknowledge that they change the temperatures at most, if not all, the weather stations that make-up the official station network from which national temperature trends are calculated. Indeed, earlier in the week, 28 pages of ‘adjustments’ were released online....(and Alarmists defenders take note)...Scrutinise the detail in this document of adjustments and not only is the rationale and methodology indefensible, but it contradicts information published in the official Station Catalogue which is meant to be the go-to document for understanding this official network known as ACORN-SAT (Australian Climate Observations Reference Network –Surface Air Temperature).

The post continues: (my bold added..perhaps the whole para should be emboldened)


That the Minister has not yet intervened, and that many within the Australian scientific community attempt to justify the practice of homogenisation that creates these ‘adjustments’ that changes cooling trends to warming trends at a whim, is reason for national shame. It all amounts to corruption of the scientific process on a grand scale, with significant economic implications. But not even a whisper about the scandal can be heard from the Australian national broadcaster or the many other typically righteous institutions and individuals that claim to be motivated by the truth.

Shame on you, cheating BoM scientists, shame on you Greg Hunt,  shame on you MSM reporters.
Read the whole post HERE. Jennifer concludes with:


In a democracy it is the role of government to oversee the correct function of institutions like the Bureau of Meteorology. Greg Hunt is the Minister ultimately responsible. So far he has been silent on the issue. This is in effect condoning what until recently would have been considered a totally unethical practice: changing received evidence to fit a preferred storyline. Its unacceptable, but will Minister Hunt do anything about it? Will the national broadcaster even report on it? What can you do about it?