Taking the "warming" out of Global Warming.

This blog reported on a recent address by Dr Jennifer Marohasy to the Sydney Institute on the "homogenisation" of Australia's  temperature data. (Link)

Previously Jennifer had requested Verification of 2013 Temperature Record from the BoM after they had claimed that 2013 was the hottest year on record in Australia. (link)

The Australian Bureau of Meteorology takes a revisionist approach to history, changing the historical temperature record so that it accords with the theory of anthropogenic global warming. This process of homogenisation is explained in ‘Modelling Australian and global temperatures: what’s wrong? Bourke and Amberley as case studies’ (link)

On that night, the Executive Director of the Sydney Institute Gerard Henderson said that the Institute would give the Bureau of Meteorology's Manager of Climate Monitoring and Prediction, Dr David Jones an invitation for the Right of Reply. So far as this blogger knows, there has been no acceptance of that invitation.

The Environment Editor of the Australian has picked up the story


Heat is on over weather bureau ’homogenising’ temperature records

Marohasy began researching the temperature records noted in historic
logs that date back through the Federation drought of the late 19th century.

Marohasy’s research has put her in dispute with BoM over a paper she published with John Abbot at Central Queensland University in the journal Atmospheric Research concerning the best data to use for rainfall forecasting. (She is a biologist and a sceptic of the thesis that human activity is bringing about global warming.) BoM challenged the findings of the Marohasy-Abbot paper, but the international journal rejected the BoM rebuttal, which had been prepared by some of the bureau’s top scientists.

This has led to an escalating dispute over the way in which ­Australia’s historical temperature records are “improved” through homogenisation, which is proving more difficult to resolve. If Marohasy is right, contrary to widely published claims, last year cannot be called the hottest year on ­record. BoM insists it is using world’s best practice to determine temperature trend and its methods are in accordance with those of its international peers.


However, the BoM's international peers have also been "homogenising" data for years. As an example, US meteorologist and blogger Anthony Watts writes:


"From the “we told you so” department comes this paper out of China that quantifies many of the very problems with the US and global surface temperature record we have been discussing for years: the adjustments add more warming than the global warming signal itself." (Link)

From the UK, James Delingpole writes


Scientists at two of the world’s leading climate centres - NASA and NOAA - have been caught out manipulating temperature data to overstate the extent of the 20th century "global warming".

The evidence of their tinkering can clearly be seen at Real Science, where blogger Steven Goddard has posted a series of graphs which show "climate change" before and after the adjustments.

Surely the winner of the  academy award for the drama of "homogenising of data" must go to Michael Mann who homogenised the peak out of the medieval warm period and homogenically raised the troughs of the little ice age. Then he homogenised the heck out of the twentieth century. 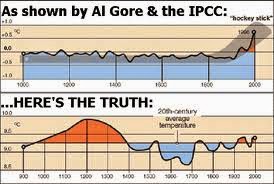 Back to Dr Marohasy's data. Remember she wrote to the BoM before publishing her data. Note also that The Australian also contacted the BoM querying Jennifer's data. As Jennifer wrote:

Mr Lloyd is the Environment Editor for The Australian newspaper and he may have been concerned I got the numbers wrong. He sought comment and clarification from the Bureau, not just for Amberley but also for my numbers pertaining to Rutherglen and Bourke.

I understand that by way of response to Mr Lloyd, the Bureau has not disputed these calculations.

This is significant. The Bureau now admits that it changes the temperature series and quite dramatically through the process of homogenisation.

I repeat the Bureau has not disputed the figures. The Bureau admits that the data is remodelled. (my bold)