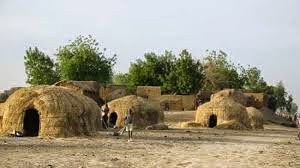 The World Health Organisation (WHO) on Household pollution:

The World Bank's strategy reverses the long-standing approach, enunciated first at the Rio Earth Summit in 1992 and many times cents since, that economic development and poverty eradication should remain the first and overriding priority of developing countries (and the nations that seek to assist them in this effort.)

CALEB S. ROSSITER, writing for the Wall Street Journal under the heading:

........And I oppose the campaign even more for trying to deny to Africans the reliable electricity—and thus the economic development and extended years of life—that fossil fuels can bring.

The left wants to stop industrialization—even if the hypothesis of catastrophic, man-made global warming is false. John Feffer, my colleague at the Institute for Policy Studies, wrote in the Dec. 8, 2009, Huffington Post that "even if the mercury weren't rising" we should bring "the developing world into the postindustrial age in a sustainable manner." He sees the "climate crisis [as] precisely the giant lever with which we can, following Archimedes, move the world in a greener, more equitable direction."

Caleb is awake to the global warming hoax and says that, regarding the global temperature rise from 1980 to 2000, the IPCC computer models could not statistically separate fossil-fueled and natural trends.

But it is as an Africanist, rather than a statistician, that I object most strongly to "climate justice." Where is the justice for Africans when universities divest from energy companies and thus weaken their ability to explore for resources in Africa? Where is the justice when the U.S. discourages World Bank funding for electricity-generation projects in Africa that involve fossil fuels, and when the European Union places a "global warming" tax on cargo flights importing perishable African goods? Even if the wildest claims about the current impact of fossil fuels on the environment and the models predicting the future impact all prove true and accurate, Africa should be exempted from global restraints as it seeks to modernize.

With 15% of the world's people, Africa produces less than 5% of carbon-dioxide emissions. With 4% of global population, America produces 25% of these emissions. In other words, each American accounts for 20 times the emissions of each African. We are not rationing our electricity. Why should Africa, which needs electricity for the sort of income-producing enterprises and infrastructure that help improve life expectancy? The average in Africa is 59 years—in America it's 79. Increased access to electricity was crucial in China's growth, which raised life expectancy to 75 today from 59 in 1968.