Climate Science is Zombie Science (or The Corruption of Real Science.) 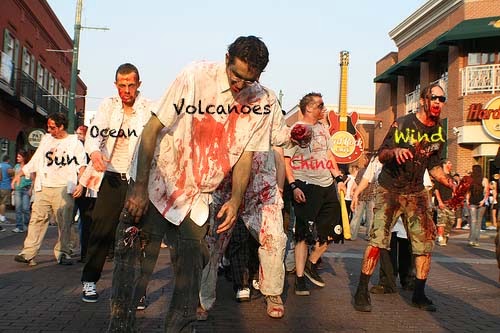 Time is running out.

So far, there has been hardly a nibble. Exactly what Peter expected when he issued the challenge via Denis' Website.

So where does the Zombie Science come in? - I hear you ask. Well, Denis, on the Signs of the Times (sott.net) site has written a post with the same name reviewing a book by Dr. Bruce G. Charlton  entitled "Not even trying... The Corruption of real science"


In this book, Dr. Charlton defines what he calls "Zombie science".

Here is the definition of Zombie science given in the on-line version of Dr. Charlton's book:

When a branch of science based on incoherent, false or phoney theories is serving a useful but non-scientific purpose it may be kept-going by continuous transfusions of cash from those whose non-scientific interests it serves.

For example, if a branch of pseudo-science based on a phoney theory is nonetheless valuable for political purposes (e.g. to justify a government intervention such as a new tax) or for marketing purposes (to provide the rationale for a marketing campaign) then real science expires and a 'zombie science' evolves.

Zombie science is science that is dead but will not lie down. It keeps twitching and lumbering around so that (from a distance, and with your eyes half-closed) zombie science looks much like real science.

But in fact the zombie has no life of its own; it is animated and moved only by the incessant pumping of funds.

The Global Warming Nazis keep moving the goalposts. When the current pause in warming occurred, at first they tried to ignore it and then, when the pause became too long to ignore,  they have run through a series of "excuses." Take your pick.

Climate Depot Analysis: ‘There have been at least nine separate explanations for the standstill in global warming’ –

As these examples of Zombie Science are twitching and lumbering around, in the back room of the laboratories of the Global Warming Nazis are probably trying to bring Zombie No 10 to life.
Posted by Geoff on February 28, 2014