Some recent events have synchronised the absurdity of AGW and the utter foolishness of its disciples.

Firstly, in an almost perfect example of irony, Professor Turney, a climate scientist from NSW, and his band of fellow AGW believers have been trapped in ice on their way to the Antarctic to duplicate Mawson’s landing on East Antarctica 100 years ago.

The purpose of Turney’s quest was to show how little ice there was at the Antarctic compared to when Mawson was there. The closest Turney got to Mawson’s position was 71 kilometers.

Many other ironies have been manifest in Turney’s ice-truncated quest. They include asking and receiving weather reports from sceptic meteorologists, preventing genuine science from occurring because of diversion of resources to rescue Turney’s happy alarmists, not to mention the escalating cost of the trip and rescue which is likely to shatter even the icy heart of any accountant.

Further irony is drenched in the media coverage of the bizarre expedition with blanket coverage of Turney’s intentions before the expedition to show that AGW is affecting the Antarctic and no mention of AGW after the ship of fools got stuck in the non-existent ice.

This media black-out or ice-out hasn’t stopped the tour leader, Turney still claiming that AGW is present down at the Antarctic. Turney says:

Sea ice is disappearing due to climate change, but here ice is building up,

This is true denial. The Antarctic has seen sea ice growing to record levels for over a decade and even the Arctic is showing more sea ice this year. So Turney should be asked where exactly sea ice is disappearing.

Turney also claims that the increased sea ice at the Antarctic is due to the sheet ice on the continent itself melting and falling into the sea where AGW takes over and breaks it up:

Turney later told FoxNews.com the ice surrounding his ship is old, rather than recently formed, and likely from a particular 75 mile-long  iceberg that broke apart three years ago. Climate change may have prompted the iceberg to shatter and float into the previously open sea where the mostly Australian team finds itself stranded, Turney said.

This is unmitigated garbage. The sheet ice in Antarctica, particularly on the Eastern side is increasing as Zwally et al show. 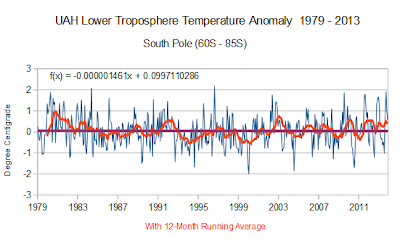 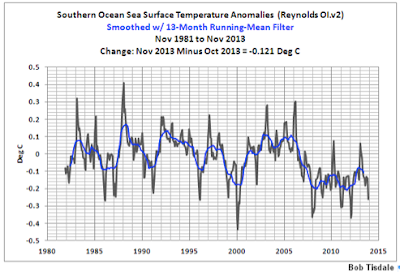 There is no way the sea ice Turney and his fools were trapped in is due to AGW because there is no AGW occurring at the Antarctic.

A final irony in Turney’s expedition was in his interview with media twit, Wendy Harmer. Showing an amazing lack of self-awareness Harmer tweeted:

Told Prof Turney on radio this A.M. his trapped ship being touted as evidence of no global warming. Oh how he laughed at the “loonies”.

This is the point; Harmer and Turney are loons who lack any sense of irony and awareness of their own “looniness”. They personify the mentality [sic] of the AGW alarmist.

Not to be outdone David Karoly and Tim Flannery also entered the fray. Flannery is beyond parody, a hypocrite and loon who believes in Gaia to an alarming extent.

Karoly is a different kettle of fish with serious academic and scientific credentials. I have written about him here.

Both Karoly and Flannery came out all clichés firing against Maurice Newman who had the temerity to say ordinary sensible people were sick of AGW.

Karoly’s piece in Fairfax is particularly egregious. Karoly begins by calling Newman a flat Earther and degenerates from there.

As Upton Sinclair wrote, "It is difficult to get a man to understand something, when his salary depends upon his not understanding it!"

This from a man who has received $millions of grants and a large annual wage to promote AGW. Newman gets nothing for opposing AGW and must be assumed to do so out of common sense and an appreciation of the evidence against AGW.

For Karoly however there is no doubt about AGW. He asserts:

There is no doubt that the climate system has warmed over the past 100 years and continues to warm.

This both a lie and subreption, lying through omission. No-one disputes that there has been warming since about 1850, the end of the Little Ice Age, when solar activity increased. The warming throughout the 20thC however, as with every time span has no connection with CO2:

No relationship between CO2 and temperature over the whole 20thC: 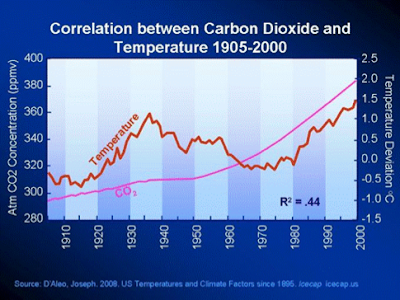 No relationship between CO2 and temperature since 1960, the period of alleged greatest AGW: 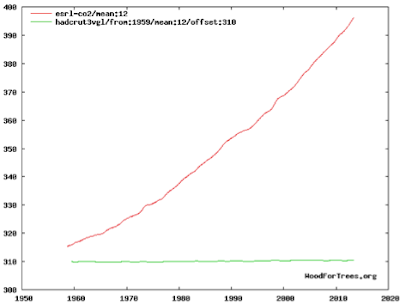 As for continuing warming as claimed by Karoly, this is manifestly wrong: 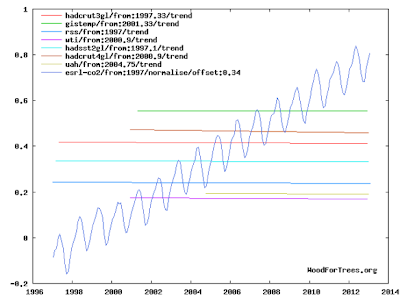 Werner Brozek in a series of articles shows that for all the temperature indices, land based and satellites, temperature has been paused for up to 23 years. Brozek has either been ignored or had claims of cherry-picking levelled against him. But this is nonsense; he has used criteria to establish the trends showing no temperature increase which is used by the Climate Research Unit, which is the mainstay of IPCC science and NASA.

Karoly should know this because he is part of the IPCC establishment. His claim that temperature is still rising is therefore all the more reprehensible.

Again the MSM, or parts of it, are unstinting in their support of AGW scientists like Karoly. Harmer again:

Maurice Newman is the enemy of my children’s future. A dangerous and delusional man.

Newman is an honest man and those to the likes of Harmer and Karoly are indeed dangerous because they reveal the dishonesty and intolerance of their position. They are loons and are in spirit on the doomed boat with Turney and the rest of his fools.
Posted by Geoff on January 03, 2014