An icebreaker gets stuck in the ice, Stephan Lewandowsky tries to mislead

Stephan Lewandowsky has written a piece for the Conversation trying to excuse the farcical voyage of the Ship of Fools aka The Spirit of Mawson.

As the world knows, this ill-conceived voyage set out to Antarctica in order to push global warming alarmism and show that Antarctica was melting.

So where does Lewandowsky start his comical tale? Down in Antarctica? Whoooooops! Not up in the arctic area. Hello?


No one could look at the graph below, which shows the extent of arctic ice during the past 1,450 years, without realising that the polar ice cap has been melting at a rapid and wholly unprecedented rate over the past few decades. 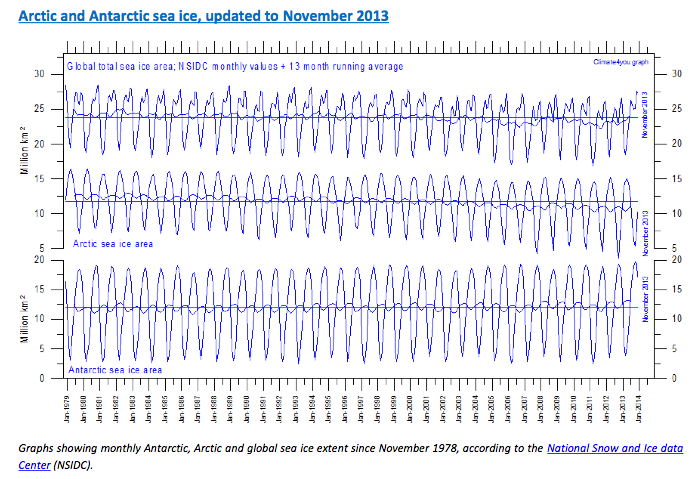 Well this graph is not Lewandowsky's 1,450 years but it does cover the last 30 or so years. No one could look at this graph and think that "the polar ice cap has been melting at a rapid and wholly unprecedented rate over the past few decades."

As the Uni of NSW holiday Jaunt was going through their last preparations, there were headlines re Arctic Ice:

It appears that Lewandowsky is guilty of the "distortion and misrepresentation when it comes to climate reporting" of which  he accuses others.

But forget the Arctic. It is not relevant. What was happening down-under from us down-under? What was happeining in the Antarctic? (Below from an item: "Ice-bound scientists get first-hand global warming lesson.")

The dramatic display of increasing Antarctic sea ice provides an opportunity to highlight the many predictions that have not come to pass. For instance, the 2007 Climate Change Synthesis Report of the Intergovernmental Panel on Climate Change (IPCC) projected sea ice would shrink in both the Arctic and Antarctic, with Arctic late-summer sea ice almost entirely disappearing by the latter part of this century.

And then another diversion from Lewandowsky - "a bronzed Aussie swimmer in his budgie smugglers..." who was at Bondi, not in the Antarctic.

Pictures and graphs can inform when they present scientific data.

Or they can be used to mislead.


The actual data, meanwhile, paint another picture about global sea level rise: a steady increase in mean sea level over the past two decades. 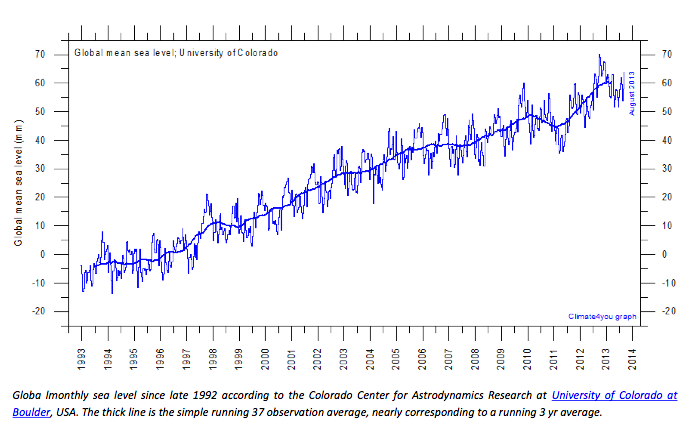 Yep! A rise of ~ 60mm in twenty years; 300mm per century at that rate. Although, as the professor fails to point out, sea level changes can happen for various reasons.

Sea-level rise is one of the most feared impacts of any future global warming. But public discussion of the problem is beset by poor data and extremely misleading analysis,which leads to unnecessary alarm.A proper understanding of the risks associated with sea-level change can only be attained by maintaining a clear distinction between changes in global sea-level (often also called eustatic sea-level) and changes in local relative sea-level.

Change in local relative sea-level is commonplace along coasts, and has been observed by mankind for millennia.A rising sea-level can adversely impact on local communities, and even give rise to legends, like that of Atlantis.As well, and even at the same time as sea-level is rising in one place, a fall in relative sea-level can occur in other places.That this is so relates to the fact that tectonic move- ments of the Earth’s crust differ from place to place, in some places sinking and in others rising. Coast lines are also eroded landwards by wave action, and else- where extended seawards as river deltas grow through sediment deposition.

In many places, historically, appropriate human engineering responses have been made to changing sea-level. For example, sea-level rise has been combatted by the building of sea walls and protective dykes. In applying such measures, the Dutch have sensibly based their coastal planning on scientific knowledge of locally observed rates of shoreline and sea-level change.