How fast is the Earth's Climate Changing? 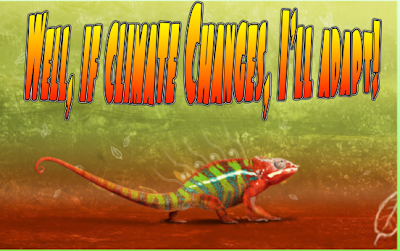 Before we go anywhere, let's start with the basics:


So, how fast is the Earth's climate changing?

Well, according to USA Today (LINK) - in a word - abruptly!

How quickly parts of the Earth's climate are changing in response to added greenhouse gases and what's forecast for decades ahead is a mixed bag, a federal advisory council says in a report out Tuesday.


For example, two "abrupt" impacts the National Research Council report said can be definitively linked to man-made climate change are: a rapid decline in sea ice over the past decade; and increased extinction pressure on plant and animal species.

Rapid Decline in Sea Ice?
Professor Ole Humlum bases his Sea Ice graphs on the NSIDC data. This graph above is from 1979 to Oct 2013. Can you see a rapid decline in the global sea ice? Or does the data show it to be right on the mean at October 2013.

Increased Extinction.
Well not according to scientist Dr David Stockwell. Writing for Quadrant on Line in a piece entitled A Theory ready for Extinction, and subheaded

"Don't worry too much over those warmist predictions that millions of species will soon be lost to climate change. Judging by their methods it is the doomsayers who are the real dodos,"

We do know is that small localized populations known as ‘endemics’ are at risk from broad scale habitat destruction by agriculture and urbanization, and from dispersals of novel diseases and predators. But these processes are not at all like climate change, and extreme events like fire, floods and cyclones seem to maintain and promote natural diversity. There is also evidence of some benefits from the increased productivity that comes with increased atmospheric CO2 concentrations.

How can a scientific assessment be objective when the methods themselves are of dubious validity, and still highly contentious? A balanced appraisal would highlight the ecological theory, paleo-evidence and respected opinion that suggests it is plausible, and even likely, that moderate climate change is not harmful to species diversity and may even be beneficial.

Give yourself an uppercut, USA Today, and get out and examine the world, including the USA, today!