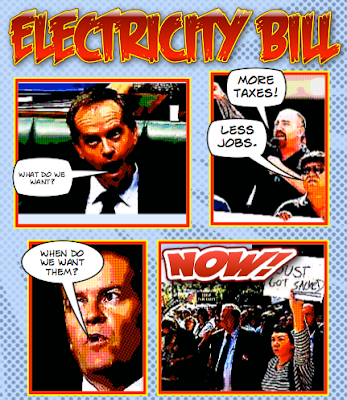 Australia has just had an election and the L-NP coalition (conservatives) won an outstanding victory. The main reasons for this victory?

The carbon tax proved to be an economic dampener and caused job losses. (back-up link1, link2)

After the election, the control of the treasury benches was reversed.

After the failures of the sucessive Rudd, Gillard, Rudd Labor governments, Bill Shorten, by a fairly undemocratic process,  was installed as the leader of the Australian Labor party.

The outgoing Prime Minister, Kevin Rudd, had changed the ALP leadership rules so that Bill Shorten should lead the party to the next election.

Bill Shorten has decided to lead his party further into the abyss.

Bill Shorten backs scrapping of carbon tax, on condition of replacement ETSOpposition Leader Bill Shorten has unveiled Labor's position on climate change, saying he will offer to “terminate” the carbon tax on the condition that Tony Abbott introduces an emissions trading scheme.

Great news (TIC) for Bill’s supporters, he wants to replace one form of tax on vital-to-life carbon dioxide to another tax.

Can you imagine a Labor rally chanting:

As (then) Opposition Climate spokesman Greg Hunt said,  after the ALP decided to introduce the carbon (dioxide) tax"


"The Union movement has abandoned its members by supporting a carbon (dioxide) tax.

"It is appalling that this organisation, which is supposed to be about representing workers, is happy to let their members' income be cut."

SO - do the union members really want a tax that stunts economic growth, causes job cuts and decreases their take home pay?

To be unnecessarily repetitive, can you imagine ALP supporters' making this chant?

Has Shorten already decided the fate of the ALP in the next election?