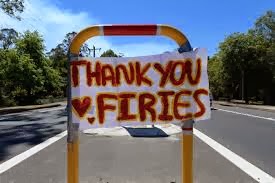 In a Morgan poll conducted 29th and 30th October, a clear majority say the New South Wales bushfires were not caused by human-induced global warming and climate change.

However, a majority of Greens supporters (60%) and ALP supporters (56%) say human-induced global warming and climate change did play a part in the recent NSW bushfires compared to only 17% of L-NP supporters, 30% of Palmer United Party supporters and 33% of supporters of Independents/ Others.

Respondents were asked: “Do you think that human-induced global warming and climate change played any part in the recent bushfires in New South Wales or not?”

The age groups are interesting. In only one age range did the "Ayes" exceed the "Nays." That was the group who have been fed unga-dunga AGW at school ie the 18-24 group.

Chapter 13 of the IPCC 5th WGI Report claims that sea level will rise by an amount between 0.26 to 0.97 metres by 2100 according to which of their new scenarios actually happens.

Relative Sea Level, the distance between the level of the sea and the level of neighbouring land is what matters to most of us. The Level of the open ocean is only of minor importance. This Report tries to mix the two up in a single chart.

Relative Sea Level is measured by tide gauges which measure the distance between the level of the sea registered on specialist equipment and a supposedly constant benchmark location on the neighbouring land. carried out in over 1000 coastal locations all over the world. The records are averages, over a day, week, month or years.

Both the level of the sea and of the neighbouring land constantly vary  from place to place and from  time to time.

The sea changes level constantly, diurnally and seasonally.  It is influenced by winds, storms and hurricanes and also by earthquakes. The level of the sea may be influenced by breakwaters and  harbour works. The equipment may be damaged or its location altered by storms. Severe storms may prevent correct measurement and give a false reading which interferes with claims for “change."

Land surfaces may change. The land may subside by weight of buildings, and removal of minerals and groundwater.The Report illustrates the problem of measurement near land covered in ice. Geological change (Isostasy) may result from plate movements and earthquakes. Many of these effects cause an upwards bias to the readings.

Long term trends may as much show these changes as any other influence. As a result  they are not a reliable guide to the future.which should be based on a recent period of reliable measurements.

The recent installation of GPS levelling equipment on many sites has greatly improved the reliability of the land-based benchmark. It has resulted in a nearly constant sea level change for many records it is therefore wrong to place reliance on older readings in order to assess future behaviour. It should be based on the most recent measurements which are the least likely to be affected by previous bias.

The records are publicly available at the Permanent Service for Mean Sea Level  (PSMSL) website at   at http://www.psmsl.org/data/obtaining/map.html  which features a very convenient map of the world from which all the records can be obtained.

Many records are defective in one way or another. Many have gaps or sudden changes. Few have a long-term continuous record.  Frequently there is little sign of change during the recent decade.

Evidence that currently there is little or no change in sea level. The following figure from Chapter 13, FAQ 13.1 Figure 1. illustrates this error. 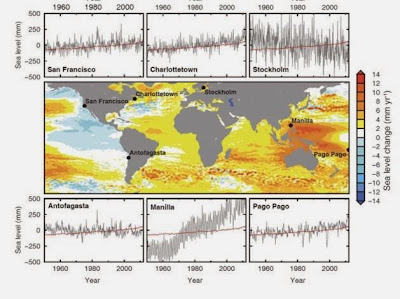 The actual current records, which are shown (rather small), disagree with this supposed trend


The following website states that the gauge is subject to subsidence

The following records from the Philippines show no recent rise.

I have published a study of the Pacific islands which also display no recent rise at
http://scienceandpublicpolicy.org/south_pacific.html

Recently there was a Pacific Forum meeting in Kiribati attended by our Prime Minister which complained that the islands were sinking. And we must take action.
(see also Sinking Islands: Fact or Fiction - Ed)

This is a recent tide gauge record from  Kiribati: 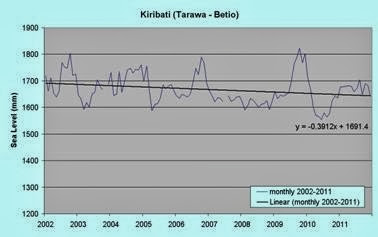 These figures and also those from Australia continue to show little change. The same is true for many islands  as shown at
http://www.contrepoints.org/2013/10/01/140868-les-oceans-montent-dangereusement-sauf-autour-iles

Future projections for different places from the latest IPCC Report Chapter 13 are shown in their Figure 13.23.

Every one of these actual measured sea levels have shown no sign of change for at least ten years, yet all the projections claim that this settled behaviour will suddenly change to an upwards level of around half a metre by the end of the century.

This is based on models which have failed to predict the lack of a global temperature increase for the past 17 years, yet it is claimed they are causing melting of ice, particularly in the Arctic.

All the models assume that any temperature rise will be least at the poles and greatest at the tropics because the water vapour feedback is lower at the poles. They do not mention Antarctica where the ice is currently increasing.

There are no measurements of temperatures on ice anywhere, on ice caps, oceans or glaciers. In all cases there are other influences on their behaviour. In the Arctic it is the temperature of the ocean and the behaviour of the ocean oscillations.

The ice in the Arctic is beginning to grow now.

The satellite measurements do seem to show a steady increase in sea level, but it seems to be little known that the instruments are subject to drift and they have to be calibrated on tide gauge measurements.

This is described in the following web address
http://books.google.co.nz/books?id=DcXZF9vogtkC&pg=PA121&dq=sea+level+rise+satellite+measurements&hl=en&sa=X&ei=c4BoUtXJA82fiAeX0IDoCw&ved=0CDgQ6AEwAA#v=onepage&q=sea%20level%20rise%20satellite%20measurements&f=false

which can be boiled down to   http://tinyurl.com/ljt4w5m

These satellite measurements have only been going since 1992. There have been several calibration problems and it is unclear to what extent it incorporates errors from tide gauges.

Models based on an assumption of a temperature change that is not currently happening, and on melting ice which is absent from Antarctica and which appears to have ceased in the Arctic, are poor guides to practical sea level changes near a coast. These need to be judged from tide gauges measuring recent local behaviour with reliable equipment.

The government has already abolished the Climate Commission and Flannery is off romancing the new lady in his life, ex-prostitute, Kate Holden. Now it is the turn of that equally pompous and irredeemably incompetent Climate Change Authority [CCA] which will soon be abolished by the practical Abbott government.

None the less the CCA has managed to squeeze out one last report about the dire need to reduce our CO2 emissions due to man-made global warming [AGW]. The report is a farrago, an absolute mishmash of unrelenting garbage.

The basis of all its recommendations about increasing renewables and reducing CO2 emissions is Chapter 2, which deals with the ‘Science’ supporting [sic] AGW. Nothing in this chapter is correct; it is misleading from go to woe. Some examples demonstrate this.

On page 2 of Chapter 2 the Report says CO2 is the most important Greenhouse gas [GHG] and is produced in large quantities by humans.

CO2 is not the most important GHG, H2O is. This is beyond dispute despite bizarre ‘consensus’ papers produced on behalf of AGW which purport to show CO2 is a control knob for climate [see point 8 here.].

But there is no question that H2O is at least 2.5 times as important as CO2 in trapping and reemitting radiation as the Report quaintly and erroneously explains. The greater importance of H20 is clearly shown in this table prepared by one the greatest of all climate scientists, Ramanathan: 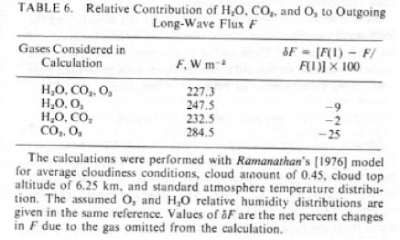 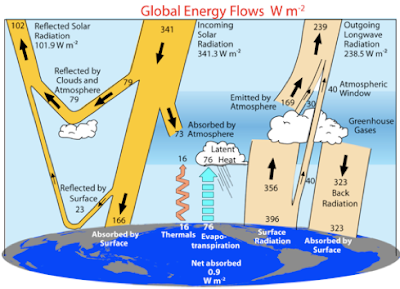 K&T show a huge amount of backradiation of 323W/m2; the bulk of this is in the 15um wavelength; is it from water or CO2?
The question is answered in the following paper: Measurements of the Radiative Surface Forcing of Climate, W.J.F. Evans & E. Puckrin, American Meteorological Society, 18th Conference on Climate Variability and Change (2006).
From Evans and Puckrin we see in tables 3a and 3b); Winter H20 94 to 125 W m-2 CO2 31 to 35 W m-2 Summer H20 178 to 256 W m-2 CO2 10.5 W m-2 Not only did the relative CO2 contribution drop in Summer, but the back radiation value decreased from about 30 in Winter to about 10 W/m2 Summer.
How do these Evans and Puckrin (2006) values compare with and confirm the energy estimates in K&T? The back radiation shown in the K&T chart is 323 W/m2. Data from Evans and Puckrin suggests that CO2 accounts for at most 10% of K&T, and in Summer CO2 is only about 3% of the K&T back radiation.
To get close to the K&T back radiation values, there apparently needs to be a LOT of water in the atmosphere; CO2 would only be relevant if there were no water.

As for the claim that humans are producing large quantities of CO2, this is contradicted by the IPCC, the source of the science which the CCA relies on. In the IPCC 4th Report, AR4, Figure 7.3 from AR4 showed the annual flux or movement of CO2 from natural and man-made sources: 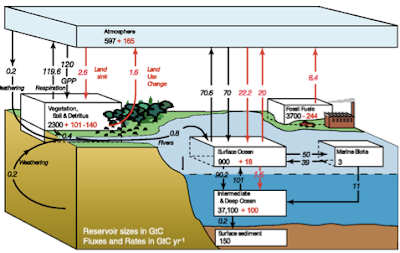 The CCA Report then says that the increase in temperature since 1950 is extremely likely caused by humans as asserted by the latest IPCC Report, AR5, which has been roundly critiqued. The CCA then scraps the bottom of the barrel by referring to the consensus and the Cook et al paper which has not only been critiqued but ridiculed.

It is worth looking at the Cook paper in some detail because this egregious paper is the basis of all that is wrong with the CCA Report. Put simply Cook used different definitions to both bolster his claim and to exclude contrary papers. As expert statistician William Briggs says:

In any survey such as Cook’s, it is essential to define the survey question very clearly. Yet Cook used three distinct definitions of climate consensus interchangeably. Also, he arbitrarily excluded about 8000 of the 12,000 papers in his sample on the unacceptable ground that they had expressed no opinion on the climate consensus. These artifices let him reach the unjustifiable conclusion that there was a 97.1% consensus when there was not.

We can't even say that 65 abstracts in the "explicit endorse" category, or 0.54% of 12,000 abstracts, supports the IPCC consensus as many climate skeptics believe the humans (via black soot, UHI, GHG) may cause 50 to 80% of the warming, but strongly disagree that man-made greenhouse gases have caused more that 90% of the 20th century warming. There has been no warming for 16 years, a fact that strongly supports the skeptics case.

Put bluntly Cook et al is a disgrace yet the CCA uses it as the bulwark of its scientific justification for the rest of its recommendations about comprehensive energy and social policy to be implemented in Australia.

The CCA should follow the Climate Commission and its members can then go about their business like Flannery and no longer cost the rest of Australia vast amounts of money with grandiose schemes to change the weather.