Andrew Montford has reviewed a lecture given by Rob Wilson at the University of St Andrews.


This was a two-hour marathon, a format that is excellent if your lecturer is good enough to carry an audience, as it enables issues to be addressed in much more depth than is the norm.

Read Andrew's review of the lecture at Bishop Hill HERE.

The bit of the lecture that has gone viral on the internet is this:


The real fireworks came when Mann's latest papers, which hypothesise that tree ring proxies have large numbers of missing rings after major volcanic eruptions, were described as "a crock of xxxx". (bold added)

This post is a blatant rip-off to feature another cartoon by the great Josh.
Posted by Geoff on October 22, 2013 No comments:

Expert takes heat off Abbott and back on Greens 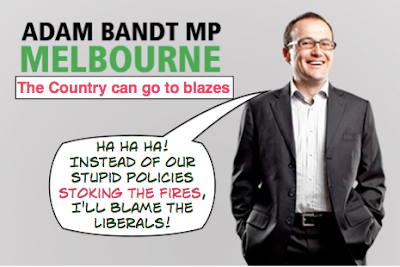 After those fires, Packham wrote an op-ed for the Australian:

I have been a bushfire scientist for more than 50 years, dealing with all aspects of bushfires, from prescribed burning to flame chemistry, and serving as supervisor of fire weather services for Australia. We need to understand what has happened so that we can accept or prevent future fire disasters. (bold added)

What causes a large bush fire?


The science is simple. A fire disaster of this nature requires a combination of hot, dry, windy weather in drought conditions. It also requires a source of ignition. In the past, this purpose has been served by lightning. In this disaster, lightning has not played a big part, and for this Victorians should be grateful. But other sources of ignition are ever-present. When the temperature and wind increase to extreme levels, small events -- perhaps the scrape of metal across a rock, a transformer overheating or sparks from a diesel engine -- are capable of starting a fire that can in minutes become unstoppable if the fuel is present.

The third and only controllable factor in this deadly triangle is fuel: the dead leaves, pieces of bark and grass that become the gas that feeds the 50m high flames that roar through the bush with the sound of jet engines.  (bold added)

So, we should do control burns to reduce/eliminate the fuels. Why aren't we?


The decision to ignore the threat has been encouraged by some shocking pseudo-science from a few academics who use arguments that may have a place in political discourse but should have no place in managing our environment and protecting it and us from the bushfire threat.
The conclusion of these academics is that high intensity fires are good for the environment and that the resulting mudslides after rains are merely localised and serve to redistribute nutrients. The purpose of this failed policy is to secure uninformed city votes.  (bold added)


So, to recap, to prevent future fire disasters we need to control fuel. However, to secure uninformed city votes (ie Green votes) that advice was ignored.

It appears that, to the loony left, votes are more important that people OR property.

David Packham, a voice crying in the wilderness but unheard in the city


where a stingy Ray of sunlight struggles feebly down between the houses tall,

And the foetid air and gritty of the dusty, dirty city

Through the open window floating, spreads its foulness over all

still is making his warning cry.

Linking the bushfire disaster in NSW to climate change is "an absolute nonsense" and reducing fuel loads in the Australian bush is urgently needed, a leading scientist says.l

But Mr Packham says there is no link.

"It's an absolute nonsense," he told AAP. 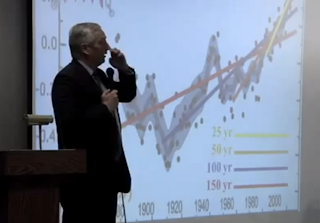 Lord Christopher Monckton is a hotly requested speaker in climate change and global warming debates. This is a presentation he gave to an audience in California where the government wanted to introduce climate change legislation.
This powerful presentation covers most of the general arguments used by global warming propagandists, and demonstrates the deceptive tactics and outright fraud that they use to steer public opinion on this matter with their fake graphs. Furthermore, he covers the topic from an economic view, and points out that the climate change hoax is nothing more than another tax grab from greedy politicians. In fact, Lord Christopher Monckton even using the climate change scientists own figures to do some simple math, and shows that with their proposed tax schemes to stop global warming; $450 billion dollars will only reduce the effect of global warming by 1/1000th of a degree Fahrenheit. It is disgraceful and without doubt, maybe the greatest hoax of our lifetime.