I have written about Adam Bandt’s hypocritical opportunism in blaming the bush-fires on man-made global warming [AGW] when their intensity has a lot to do with the Greens’ policy of preventing hazard reduction and back-burning.

Now Andy Pitman, one of the leading academic alarmists has come out in support of Bandt. On The World Today on 21/10/13 Pitman said Bandt’s statements were a question which needed to be asked and that the hot Winter had prevented plants from being their normal senescent selves causing them to transpire more and become drier. This caused more intense bush-fires and the whole thing was caused by AGW.

Pitman referred to the usual problematic ‘facts’ such as the 2012-2013 Summer being the warmest yet which is debatable if you compare the Bureau of Meteorology [BOM] records with the UAH satellite records for December, January and February [Graph from Ken Stewart and Jo Nova]:

According to the more reliable satellite records the 2012-2013 Summer was 11th in the last 29 years.
There is no doubt this Winter was warm; both the UAH and BOM agree:
BOM: 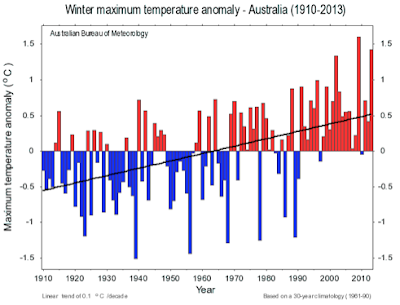 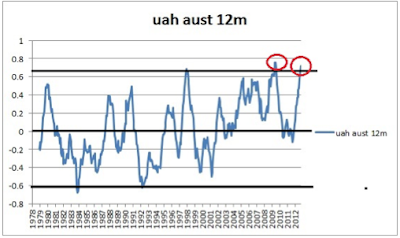 Both BOM and UAH show a warm Winter and September. But the Winter was not uniformly hot as there was continuation of a cooling trend in places like Eyre [from Chris Gilham]: 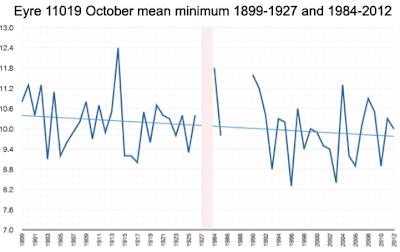 Even in the warm areas is it fair to say, as Pitman does, that a 1.4C temperature anomaly is sufficient to create an extraordinary response from the Australian vegetation which has surely seen such hot conditions before? Pitman’s theory about increased transpiration is also constrained by the humidity of the air; with water moving from the plants due to increased transpiration as Pitman suggests that water going into the atmosphere will decrease any further transpiration from the plants. In fact a study partially set in Australia by Ferguson and Veizer found such an effect where plant transpiration will plateau.

In another study set in the Murray Darling Professor Franks and his team of Natalie Lockart and big Dimitri Kavestski found that warmer temperatures will preferentially warm the atmosphere rather than increase evapotranspiration. As Franks explains:

“During drought, when soil moisture is low, less of the sun’s radiant energy goes into evaporation and more goes into the heating of the atmosphere which causes higher temperatures.

“Most importantly, the elevated air temperatures do not increase evaporation but are actually due to the lack of evaporation and this is a natural consequence of drought.

“Therefore any statement that the drought experienced in the Murray Darling Basin is a direct result of CO2 emissions is fundamentally flawed.”

Pitman made no mention of the manifest effect on bush-fire intensity due to Green policies and by defending Bandt’s egregious comments should join Bandt in the bastard category.

Pitman is not the only one to get into a lather about the warm conditions. Fresh from announcing the worst kept secret in the media that it whole-heartedly supported AGW, Fairfax published this graph: 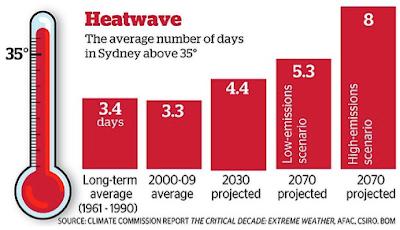 The general tenor of the article was that things were getting worse. But look at the long-term average in the block next to the screaming red thermometer; that’s right, the average during the base period is 3.4 days above 35C. Now look at the second block. The average from 2000-2009 is 3.3, LESS than the average.

Things are certainly getting worse; if you mean the absence of fact and increase in hysteria by the alarmists.