When talking about the latest IPCC 5AR report, Dr Tim Ball, former professor of climatology at the University of Winnipeg, says the 95% certainty is what happens when you have "premeditated science."

What they are getting out of the computers is not what is actually happening.

(The IPCC) produced the "Summary for Policy Makers (SPM) - it's a document produced to scare the public and scare the politicians into providing more funding for their own research and their own political agenda.

The actual science report which supposedly it is based on isn't going to be released right away. The SPM completely disagrees with what the science report is saying. They know the media and the public I'm not going to read science report - if any of them get into it they're not going to understand it anyway. They produce this summary it's completely political and it's produced by politicians for the most part and some scientists who have been corrupted.

The temperature is going down and it has for 17 years while CO2 increases. According to their hypothesis and model that's simply not supposed to happen. In a panic mode rather than doing what they should do, coming out and saying our science is wrong, our models are wrong and we apologise for all the inconvenience we've caused you, they're just ploughing ahead. 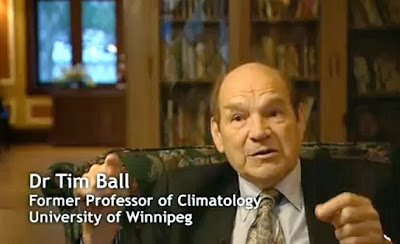 It's the Sun, Stupid!

It's the one thing that they've ignored from the start; it's the sun.

The United Nation's commission on climate change said, in 1992, IPCC - we want you to look at only  those climate changes caused by human activity.

OBJECTIVE
The ultimate objective of this Convention and any related legal instruments that the
Conference of the Parties may adopt is to achieve, in accordance with the relevant provisions of
the Convention, stabilization of greenhouse gas concentrations in the atmosphere at a level that
would prevent dangerous anthropogenic interference with the climate system. Such a level
should be achieved within a time frame sufficient to allow ecosystems to adapt naturally to
climate change, to ensure that food production is not threatened and to enable economic
development to proceed in a sustainable manner.


“The sun is causing the cooling that’s going on. The sun reached a peak of activity around 2000 and has been declining ever since,” said Ball, who noted that the cooling trend will continue for years to come.
“We’re heading toward what occurred around the year 1800. It was called the Dalton Minimum of low sunspot activities,” he explained. “We certainly are down to that in number of sunspots this year. That means the cooling will continue at least until 2030 and yet the government is preparing for warming, which is outrageous. Some people think that this cycle of sunspot activity and global cooling will take us down to as cold as it was around 1680, which was the nadir of the Little Ice Age.”
“The main reason they were able to get away with what they’ve gotten away with is that a majority of the mainstream media were complicit in what (the IPCC and other scientists) were doing,” Ball said. “This is where the Founding Fathers have been corrupted because they believed the media would be the watchdogs, the gatekeepers. The mainstream media have failed completely.”
Read more at http://www.wnd.com/2013/10/climate-guru-puts-global-warming-on-ice/#b3Eew3FQa2kOkc6F.99