Australia has been sold a PUP! 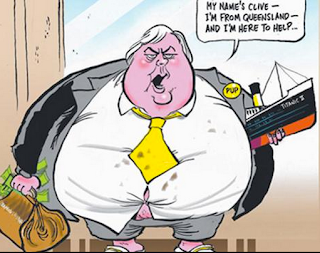 Our fledging NCTCS party is opposed to the scam of man-made global warming. You would think that mining magnate, Clive Palmer was in simpatico with us.

We know that the "science" has been frauded and that the next report from the political body - the Intergovernmental Panel on Climate Change (IPCC) will slightly retract from its "Alarmist" stance in its next report.


Climate sceptics should stand firm and not let the IPCC get away with weasel words back-peddling from years of failed predictions and poor science. Multi-Billions of dollars worth of harm has been and is being done to western economies in the guise of saving the planet.

Australia should cease all cooperation with the IPCC and no Govt funded scientist or organization should participate.

So, who else do you think should be opposed to the great GREEN myth of the falsified catastrophic man-made global warming hypothesis? Surely - Mining Magnate Clive Palmer.

Well, Clive is reported to have spent at least $12 million (link) on his election campaign, whilst our fledgling minnow party spent, nationwide, around $40,000.

So, for every $4 dollars we spent, Clive spent $12,000 - it's great if you have money, and can give every household a DVD of your project to rebuild a sinking TITANIC, but Clive, why do you support the GREENS?

Here are some of, at least at this stage of the count, the way Clive Palmers' preferences are going:

In South Australia at Count 29:

And in Western Ausralian, where do you think, in this major mining state, Clive's PUP preferences went?