Senator Xenophon is the last man you want coming after you in South Australia, where he is head and shoulders the state's most popular politician, a man who doesn't need the preferences of any political party to be re-elected next Saturday but whose surplus votes are set to be crucial to the make-up of the incoming Senate.

As matters stand, the Greens' immigration spokeswoman and darling of the Left, Sarah Hanson-Young (SHY), is in acute danger of losing her spot after Xenophon turned on her, potentially costing the minority party a future leader.

As NCTCS has written before, If you want to get rid of SHY and you live in South Australia, you should vote for NCTCS's Lead Senate Candidate, Leon Ashby. (See: Best Chance to Remove the Greens from the Senate)

Jamie Walker from the Australian continues:


Central to those calculations are the numbers in the Senate, where the minor parties and Xenophon will hold sway, one way or another. Bob Katter's Australian Party is a strong chance to break into the Senate in Queensland through star recruit James Blundell, the country music singer. A hopeful Katter says: "God willing, after this election . . . we will be in a much more serious position to influence things."

In SA, the accusations are flying between Xenophon and the Greens, who have accused the one-time No-Pokies MP of betraying progressive voters and giving the Opposition Leader a "leg up" to implement his deeply contested legislative agenda, starting with the repeal of Labor's carbon pricing scheme should he come up trumps on September 7.

Nick has moved from from No-Pokies to more honesty, i.e. No-Porkies. Political historian Clem Macintyre, of Adelaide University has been playing around with the numbers:


But when he plays around with the numbers - a big Liberal primary vote, against a low one for the Greens, for example - curious outcomes emerge. Family First is in with an outside chance, Macintyre says. And wait for this: because the Greens ranked the NO CARBON TAX Climate Sceptics party ahead of Griff (Xenophon's running mate), he says there is a possibility - albeit remote - that it could bolt in, having cut preference deals with a raft of the Senate minnows. 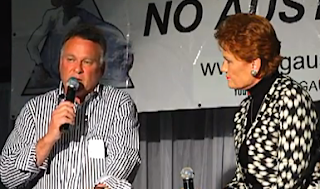 Pauline Hanson and Peter Manuel from FLAG Australia (Incorporated) discuss Agenda 21 and Sustainable Development Bureaucracy that is affecting the food bowl of Australia and in particular South Australia under the NRMA Act 2004.


What an absolute privilege to be on stage with Pauline and hear her speak from the heart about Agenda 21 and the privatisation of our water and the restrictions that are being forced upon us farmers by the environmental movement which make it so difficult to supply this great country with a clean healthy food product.

Pauline came to South Australia after a phone call I made to her a few weeks ago in regards to Natural Resource Management issues that control the way we run our freehold land and the uphill battle we have to grow food.  Pauline did not hesitate and took time out from her very busy campaigning schedule to come and speak and answer any questions thrown at her.

In the short time I had with Pauline it was very obvious that most that has been written about her over the years in regards to being a conspiracy theorist and racist is absolute rubbish.  She is far from a racist, highly intelligent and what you see is what you get.  She certainly wouldn’t do any dirty deals behind closed doors if she was fortunate enough to be elected into Parliament.