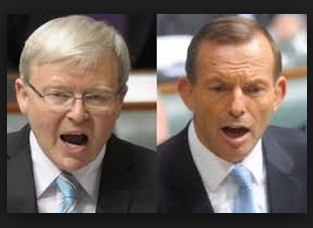 Eloquence, what is it?  The Dictionary has a three-legged definition;

1. ease in using language to best effect
2. powerful and effective language
3. the quality of being persuasive or moving.

Why am I looking at this word? Well a friend recently wrote that, of the two Australian party leaders looking to be Prime Minister after the next election, the incumbent Kevin Rudd was the more eloquent.

That got me thinking. As treasurer of the NO CARBON TAX Climate Sceptics (NCTCS) and as such, theoretically I am not for either of the main combatants. However, as NCTCS is strongly anti-Green and Anti-socialist/communist, so we could be described as centre-right.

When my mate, we’ll call him Derr (name changed to protect an innocent in politics) said Mr Rudd was the more eloquent, I replied with:-

Even Fairfax journalists are asking “will this guy ever shut up......?”

"In trying to dominate the nightly news bulletins, the Prime Minister is talking for longer than the news itself." (link)

Mr Rudd is an eloquent speaker. If he needs a little longer to convey a message, so be it.

Eloquent with the kids, or at least he thinks he is!

From that link, what about - "Rudd is also becoming increasingly fluent in his use of ''daglish'' Is talking like a dag eloquent? What about:- He is frequently referring to his home town as ''Bris'' (despite the fact it also means ''male circumcision ceremony''  What about "Boat people have become ''folks on boats'' Really?  Sheesh! I really don't think that falsely trying to pander to school kids with "daglish" is eloquent.

Derr came straight back with:

You know as well as I do that diminutives are acceptable parlance in Australian speech (even though I, personally, find them rather gauche).

So, I introduced a satirical piece from Mike Carlton (I am not sure if Derr realised that it WAS satire.)

Hey Derr, I have found the source of Kevvie's programmatic eloquenicity; he get's it from school kids and his childlike staffers: (link) ''Do we want you guys to have a great education? Yes we do!" he bellows.  "Do we want you to get a fair crack of the stick? Yes we do!" He flips the familiar winglet of silver hair back off his forehead. There are puzzled looks, a few sniggers. Fair crack of the stick? It turns out he means fair crack of the whip.  The idiom clunks, like that famous shake of the sauce bottle, as if Kevin had somehow learnt Australian As A Second Language.  Later I hear him tell a staffer "don't come the king prawn with me, mate''."I think it's 'raw prawn', Kevin," I say helpfully.He stares at me for a moment, rather crossly, but then whips out a small notebook and carefully jots it down. Raw prawn. (link) You're right, Derr. He is eloquent.

Note that I agreed??? But Derr came back with:

Dear, dear, Geoffrey, you do get carried away don't you? As commented before, he does use some vernacular expressions but this does not make him any the less eloquent. One dismisses these remarks as Rudd idiosyncarcies. I am prepared to accept these as being preferable alternatives to Abbott's 'slow deliveries without much substance'.

So back to our definition:

eloquence  1. ease in using language to best effect2. powerful and effective language3. the quality of being persuasive or moving.

Regarding the two debates the leaders have had so far, it is generally agreed that TA won the first even though the PM cheated and used unallowed notes.

So does KR have the parts of the definition to be called eloquent?


But there is only one poll that counts. That will show how eloquent the two leaders have been.

Here's a clip showing our PM's ease in using language, powerful and effective language, the quality of being persuasive or moving.