Posted on theenergycollective by Schalk Cloete

Many people still think that it will not be long before renewable energy such as solar and wind becomes outright cheaper than fossil fuels, thereby leading to a rapid expansion of the thin orange slither in the graph below. This is an ideologically very attractive notion, but, as discussed in this article, it is questionable whether this is in fact physically possible.


He then says that renewables, if they are going to compete in an open market, technology has to advances to cover the above two points.

He mentions that the Earth is surrounded by incredible amounts of diffuse energy like solar radiation and wind but says "this energy is useless to us unless it is concentrated into forms such as electricity or fuels."


The reason behind this is called the second law of thermodynamics which states that energy must flow from a concentrated form to a more diffuse form in order to do work.

On the intermittent nature of renewables Cloete says:


If intermittent renewables like solar and wind are ever to contribute a sizable portion of our global energy mix, a large amount of additional infrastructure will need to be deployed in order to counter the large fluctuations in output varying over timescales ranging from seconds to years.

So, these are the facts. In order for intermittent renewable energy sources such as solar PV to effectively compete with fossil fuels like coal, both the price of installed solar panels and the price of battery storage will need to reduce by a full order of magnitude. In addition, optimistic long-term projections state that both solar panels and battery storage will reach technological maturity at roughly triple the cost of their fossil fuel counterparts.

Read the whole item at The Energy Collective - Link.


Authored by:   Schalk Cloete
I am a research scientist searching for the objective reality about the longer-term sustainability of industrialized human civilization on planet Earth. Issues surrounding energy and climate are of central importance in this sustainability picture and I therefore seek to learn more from the Energy Collective community. 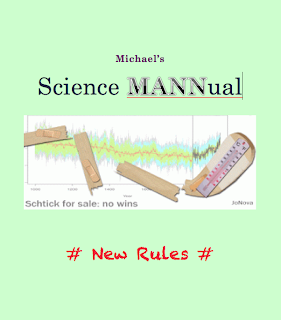 Michael Mann, together with Bradley and Hughes, produced the "Hockey Stick graph" that eliminated the Medieval Warm Period (MWP) and the subsequent Little Ice Age (LIA). This was after IPCC lead author Jonathan Overpeck has said that the MWP had to be eliminated to scare people with the Global Warming hoax. (link)


The hockey stick graph at the center of this dispute was based heavily upon data taken from trees on the Yamal Peninsula in Siberia. Created by Mann and his colleagues, it supposedly proved that air temperatures had been stable for 900 years until the 20th century, and then suddenly rocketed off the charts (attributing this to human-caused greenhouse gas emissions).

But there were some problems with that graph and the research behind it.  Some very big problems. One was that the Medieval Warm Period which occurred between about AD 800 and 1100 along with the Little Ice Age (not a true Ice Age) which occurred between about AD 1350-1850 somehow turned up missing. And as for those Yamal tree samples, they came from only 12 specimens of 252 in the data set… while a larger data set of 34 trees from the same vicinity that weren’t used showed no dramatic recent warming, and warmer temperatures in the Middle Ages.

Interestingly Michael has made some pronouncements in a post on Peter Guest's blog:

“One side, us, the scientists, have to be true to our principles, have to be truthful to our audience, have to state our findings with appropriate caveats, and the other side sees absolutely no need to do that.”

Surely he missed stating the caveats with his MBH98 paper. But the amazing piece from Michael's MANNual is almost unbelievable coming from a scientist:


“Proof is for mathematical theorems and alcoholic beverages. It’s not for science."

Proof is for mathematical theorems and alcoholic beverages. Really? Is this the new Science?


"Science works in evidence through best explanations, most credible theories."