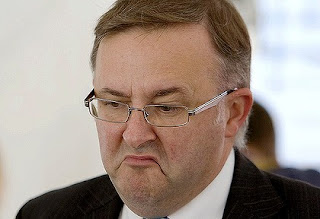 Anthony Albanese, the soft face of socialism according to Andrew Bolt, has released the State of Australian Cities 2013 report.

Albanese in his press release says "City residents are more vulnerable because of the Heat Island Effect (HIE) ... which can add up to four degrees to temperatures."

Obviously Albanese has made the most of the 10 minute briefing he would have had from the Bureau of Meteorology [BOM] before he went out and fronted the press. Unfortunately he, like most other pollies has taken whatever he was briefed with as gospel. If he had bothered to do some of his own research and checking [yes I know, stop laughing, a pollie doing his own fact-checking] he would have found that the BOM doesn’t even think UHI will be a problem.

Blair Trewin in his technical manual to the ACORN-SAT Australian temperature record can only find a UHI effect in minimum temperatures and in only one of the major urban areas Adelaide.

This suggests that either any urban influence on temperatures at these locations was already fully developed by 1910 or that anomalous urban warming was manifested as step changes, possibly associated with specific buildings or other developments in the vicinity, which were successfully removed in the homogenisation process. It is likely that the first explanation is the dominant influence at Sydney, and the second at Melbourne.

On the face of it this is ridiculous. Since 1910 Sydney has increased in population and size 10 fold. How could its UHI effect be finished in 1910? Likewise how could the BOM’s “homogenisation process” cater for particular buildings?

What is more likely is that the methodology used by the BOM to “homogenise” or adjust temperatures is faulty. The new ACORN-SAT temperature network took over from the previous High Quality [HQ] network, corrected for the HQ biases but still found the same trend. I’m sure Albanese can relate to those sort of corrections!

There is no doubt the BOM has had trouble with its ‘adjustments’ to raw temperature data. The bias in their adjustments is well documented and noted in Stockwell and Stewart’s paper. Stockwell and Stewart list several areas where bias was incorporated into the HQ network. Supposedly Trewin’s technical manual overcame these biases in the ACORN-SAT. Yet at Table 6 and Figure 19 of Trewin’s technical manual we see the list and form of the ‘adjustments’ made to temperature to produce ACORN-SAT and overcome these biases in the HQ network.

These adjustments do not make sense.

In other-words, the adjustments have created a part of the trend. That is wrong.

So, the temperature information being provided to Albanese and which forms the basis of the State of Australian cities report he was spruiking is problematic to say the least. That doesn’t stop Albanese from claiming heat kills more people than cold.

Common sense tells us that cold is much more lethal than heat as numerous studies have found. And the reason why people die in heatwaves is because green policies based on the lie of AGW make using air-conditioners too expensive!

Albanese continues the lie of the 2012-2013 summer being an ‘angry” one. This is simply not correct. The satellite record is damning about the BOM’s claim of a record hot Summer:

Again this is a blatant falsehood. The 1999 Australian Yearbook shows many hotter temperatures than 49.6C in the past including 52.8C in Bourke in 1877. As part of its “homogenisation” the BOM has removed or ‘adjusted’ all these past record temperatures.

Personally I’ve thought this winter has been as cold as any for a long while; my subjective impression is also shared by what is happening in the US.

But AGW has never been about the real world. It is a manufactured world conjured up by models and computers programmed by green zealots. Those very people are busy ‘adjusting’ the past to make sure it is consistent with the lie of AGW.

This week saw the recommendation by ICAC that former ALP NSW politicians be charged with fraud and corruption. Reality has entered their cosy little make believe world.

Is it too much to hope that similar charges will be laid against the main advocates and profiteers of AGW?