Agenda 21 Win for the Good Guys. 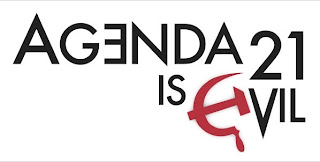 John has now reported that he has had a win against the insidious Agenda 21 with the Queensland State Liberal National Party who passed a resolution opposing Agenda 21; that resolution now becoming LNP Policy.

NCTCS blog has previously written of the creeping Agenda 21 threat, including:

It should be noted that while a matter may become Party Policy, the Parliamentary Party DOES NOT HAVE TO ACT ON IT OR COMPLY WITH IT ! I find this a little confusing in the context of Government of the people, by the people and for the people !

None-the-less, today we took a clear step forward and it will be difficult for Coalition MPs to be quite as dismissive as they have in the past of Agenda 21.

On the links to "Shutting the Debate Down" (see above) Opposition MP Greg Hunt falsely claimed Agenda 21 is a 20 year old, dead, non-binding declaration,  Mr Hunt is - as John says; "Dismissive."

John's Submission to the LNP:

3 MINUTE ‘AGENDA 21’ RESOLUTION PRESENTATION
for LNP Convention 19-21 July 2013
We are presenting this very simple resolution because we consider it to be extremely important in the context of protecting the wellbeing of Australian society.

Many interested people consider AGENDA 21 to be nothing other than a harmless, non-binding, United Nations document simply promoting the protection of the environment and hence deserving of support.

However, Agenda 21 is anything but that and in reality it is an insidious, and carefully structured and worded, 40 chapter piece of Social Engineering setting out how the UN considers the world should live in the 21st century. It is a Trojan Horse with its dangerous, Fabian Socialist objectives cleverly camouflaged with some desirable, environmental objectives.

Interestingly, Agenda 21 was not released as an international treaty document in the Rio Declaration and in not requiring formal ratification avoids Australian judicial adjudication. Its promoters have therefore been able to operate openly in Australia quite independent of normal Australian democratic controls.

As a result, we have seen, Agenda 21, with guidance from the UN ICLEI office in Australia, slowly infiltrate, into our society virtually unnoticed, particularly at Local Government level, over the last twenty years.

While such a Fabian scheme would be enthusiastically welcomed and promoted by any true socialist government, one would certainly not expect a politically conservative party such as the LNP to support and promote a scheme such as Agenda 21 with its prime objectives including the effective abolition of private property rights, the implementation of Global Governance (One World Government) and the   effective redistribution of wealth.  Just as an example, look at the effect of the Native Vegetation Regulation.

I am sure it will be agreed that it is incomprehensible for the LNP to support and promote such a scheme that must be in conflict with the principles of virtually every LNP member.

However, the reality is the Coalition has to date not opposed the step by step implementation Agenda 21 in Australia but on a number of occasions actually supported it. I believe that this is a situation that should be immediately corrected and hence I would hope that you will strongly support this resolution.

This Climate Needs to Change

A response to President Obama's climate speech in late June originally published in The Oregonian. (link)

In 1960 when a U2 spy plane disappeared over the Soviet Union, President Eisenhower told the world that it was a “weather research aircraft” flying out of Turkey. That cover story worked for a week until Soviet Premier Khrushchev confirmed that the pilot had been captured deep in Soviet territory. Should an American President have supported an elaborate fabrication? It served no lasting purpose and demeaned a great President.

The cases that followed involving Presidents Nixon and Clinton were far less excusable and far more damaging to the presidency. They stretched the truth to avoid accountability.

Now we have yet a different situation where a President is trying to sell a vast program of carbon controls and renewable energy subsidies, based on arguments that may meet political standards for honesty but fail scientific, engineering, and legal standards. That is far more damaging to this nation than Bill Clinton denying an affair with Monica Lewinsky.

President Obama's recent 'Climate Change' speech reiterated his assertions, that the earth is warming dangerously, that human emissions of CO2 are clearly responsible, and that virtually all scientists agree with him. As 115 scientists from around the world told him several years ago: “With all due respect Mr. President, that is not true.” One was Nobel Laureate in Physics Ivar Giaever, a Democrat. The president now calls those who dispute his hysteria the “Flat Earth Society.”

Because the President knows that Congress and the American people will never support carbon reduction schemes that seriously harm our economy, he is pursuing a strategy involving rhetorical subterfuges while his Environmental Protection Agency quietly moves forward with regulations.
Consequently, eleven of us filed an amicus brief with the Supreme Court recently asking them to overturn the EPA's “Endangerment Finding” on CO2. This is the first time that the high court has been asked to consider purely scientific arguments rather than, for instance, the EPA's failure to follow the recommendations of their Inspector General.

We prove that the EPA's “Three Lines of Evidence” are fatally flawed, based on multiple robust data sets, not on 'expert opinion' from those paid to support the president's position. Honest data show no unusual warming in the latter half of the 20th century and none at all for the last fifteen years despite a slow increase in CO2. The 'Hot Spot' that must exist in the tropical troposphere for their theory to work is completely missing. And the climate models for which the taxpayer has paid so dearly, are epic failures. Without global warming, carbon dioxide is clearly 'Not Guilty.' And hence the hysteria about extreme weather caused by CO2 is likewise nonsense.

What about the programs that the president is trying to sell to cure a problem that does not exist?
These are substantial hoaxes also. While “efficient use of energy” and “renewable energy” sound good, they are far from the reality. Ethanol, solar, and wind typically produce little net energy beyond what went into their manufacture. They merely launder high quality energy from fossil fuels into less desirable but politically popular kinds.

Remarkably, wind and solar do not even reduce our 'carbon footprint,' because they need backup by special natural gas power plants designed for rapid start-up. These are far less efficient than state-of-

Because President Obama has no scientific education, he can hardly be expected to understand the details of what we are saying. But as an attorney, he should know what constitutes honest argument.

Gordon J. Fulks, PhD lives in Corbett, Oregon, and can be reached at gordonfulks@hotmail.com. He holds a doctorate in physics from the University of Chicago, Laboratory for Astrophysics and Space Research.