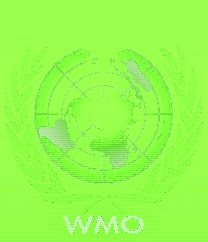 When even the noble Red Cross uses its donations to peddle Alarmist Global Warming [AGW] propaganda it should come as no surprise that the World Meteorological Organisation [WMO] is also peddling AGW alarmism.

The WMO report has been critiqued by Anthony Watts who at least finds some sense in the report’s concession that:

No clear trend has been found in tropical cyclones and extra-tropical storms at the global level.

Actually, even that ‘concession’ is rubbish because there are clear trends in cyclone activity. In Australia the trend is down, globally it is down, and the attempts by the alarmists to prove otherwise are typically false and based on shoddy statistical tricks.

Both are true. But the WMO’s conclusion that this proves that AGW is real is not justified. It’s not justified because it’s wrong.

Short-term natural climate variability can often be linked to recurring patterns of atmospheric pressure and ocean circulation. El Niño and La Niña episodes, for example, result from rapid changes in the sea-surface temperature in the equatorial Pacific Ocean.

But then declares that:

Again this is true as the SOI index shows. The reason for this is that from about 1998, the year of the super El Niño,  there has been another climate shift where the Pacific Decadal Oscillation [PDO] has turned to a –ve phase in which La Niña dominates.

The WMO is asserting that the high temperatures since about 1998 are therefore due to AGW since there has been no big El Niños to raise temperature. In fact what has happened DISPROVES AGW.

AGW is disproved as this graph shows: 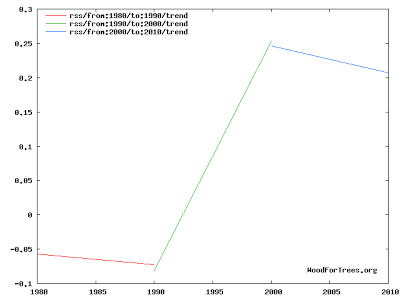 The change in temperature trend is plain. Post 2000, when the –ve phase of PDO began, temperature has starting to decrease. Naturally the post 200 period will still be hotter than the 1990s because even though the post 2000 trend is down it is coming down from the peak created by the 1990’s temperature which will mean it will still have higher average anomalies.

To say the 2000 temperatures are higher than the previous decade is pure chicanery, a statistical lie.

If the WMO can’t even get basic facts correct then all its conclusions must be suspect. There is nothing new about advocates of AGW being suspect. AGW is arguably the ‘most’ guilty idea in history.