To Australians it's deja vu all over again.

Australian Prime Minister (at time of writing) Julia Gillard promised, prior to the last election, that there would be no carbon (dioxide) tax under the government that she led. After the election, it was an entirely matter. Much was heard of carbon pollution.

During the last US election campaign, President Obama kept mum about "carbon pollution" and "carbon taxes." However, during his second inauguration address, he called for new action to “respond to the threat of climate change.” His case for man-made global warming was exceptionally flimsy.

Then we had the alarmists calling on Obama to act on the falsified hypothesis of man's CO2 emissions causing alarming warming.

As reported by the Australian Today:

US President Barack Obama has laid out a broad new plan to fight climate change, using executive powers to get around "flat earth" science deniers who have blocked action in Congress.

Officials say the plan will allow the US to meet a goal of cutting greenhouse gas emissions by 17 per cent below 2005 levels by 2020, a pledge Mr Obama made at the inconclusive Copenhagen summit in 2009.


The President even resorted to describe the realists with the highly offensive term of "deniers."


Mr Obama said he had no patience for climate change deniers, including many in Congress, who dispute the science holding that carbon dioxide emissions contribute to a dangerously warming planet.

"We don't have time for a meeting of the Flat Earth Society," he said.

"Sticking your head in the sand might make you feel safer, but it is not going to protect you from the coming storm."

But who are the true "deniers?' Who are the ones sticking their head in the sands? 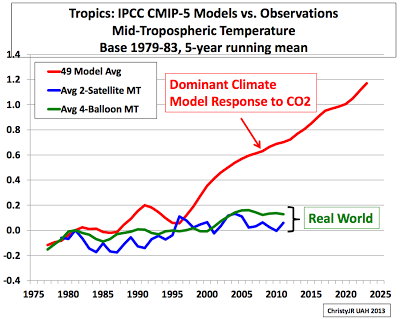 Depending on which set of their data for global temperatures is used, there has now been no significant warming for 17 to 23 years. Meanwhile atmospheric CO2 keeps rising. 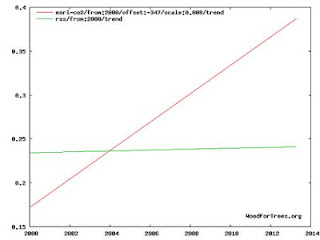 Why is it that the alarmists are getting more feral as more and more scientists are showing up the hoax?

The president's address has caused a flood of opinions:


Call it the audacity of deceit. At the heart of the President’s speech is his reference to “carbon pollution.”

It has no scientific basis. You will not read that in Wednesday’s newspapers, nor hear it on radio and television unless you are tuned to conservative media.

The claim that carbon dioxide (CO2) is a pollutant is absurd insofar as it is, next to oxygen, the second most vital gas for life on planet Earth. It is responsible for the growth of all vegetation, including crops vital to feeding humanity and the livestock on which they depend as a food source.


From Myron Ebell of the CEI:
http://cei.org/news-releases/president%E2%80%99s-climate-plan-undemocratic-bordering-authoritarian-disingenuous-keystone


Obama’s all-pain, no-gain agenda will cost jobs, drive up prices and have little effect on global emissions,” said Myron Ebell, director of CEI’s Center for Energy and Environment. “It is undemocratic, bordering on authoritarian.

“It confirms the Obama administration’s all-out war on coal, calls for more negotiations on a treaty the Senate will never ratify and displays an alarming lack of knowledge about the state of climate science.


From Anthony Watts (WUWT)
The President’s Climate Action Plan – the good, the bad, and the ugly (with full documents)

From Donna Laframboise's No Frakking Consensus.

The term “carbon pollution” is one of the most odious slogans ever dreamed up by environmentalists. If the president has now officially adopted it, our opinion of him cannot remain the same.

As any high school student knows, carbon is represented by a C on the periodic table. We are carbon-based life forms; carbon is within us and all around us.

Anti-global-warming activists are, in fact, concerned about something else – carbondioxide. Comprised of one molecule of carbon and two molecules of oxygen (a separate and distinct element on the periodic table), CO2 is a greenhouse gas.

From The Heartland Institute:


“The president’s restrictions are unnecessary, futile, and economically punishing. The restrictions are unnecessary because global temperatures have remained flat for the past 15 years, proving alarmist climate models predict far too much warming and have no basis in reality. Moreover, U.S. carbon dioxide emissions are already falling dramatically without the punitive measures the president is proposing.

“The restrictions are futile because new growth in Chinese emissions will render all U.S. carbon dioxide cuts moot within a few short months. And even if Chinese emissions growth did not wipe out U.S. cuts, those U.S. cuts would have no measurable impact on global temperatures. The restrictions are economically punishing because they will drive up energy prices throughout the U.S. economy, which will stifle job creation and additionally drive existing businesses and jobs overseas.

“In short, the president’s restrictions are economically ruinous while providing no appreciable benefit.”

“With clear evidence that the planet has not warmed in the past 15 years while carbon dioxide has increased, we know reducing emissions of CO2 will have only one impact: to increase the cost of American energy. Obviously this is Mr. Obama’s intent, and while it will thrill his anti-capitalist environmental supporters, it will hopefully wake up the general public to the fact that he does not have their best interests at heart in creating more radical environmental regulations.”

“In discussing the rationale for his climate change and energy plan, President Obama claims that carbon dioxide, or CO2, ‘causes climate change and threatens public health’ and that ‘cutting carbon pollution will help keep our air and water clean and protect our kids.’ Unfortunately, President Obama’s statements could not be further from the truth. Far from being a ‘pollutant,’ carbon dioxide is the elixir of life.”

Is the Moon made out of Cheese? 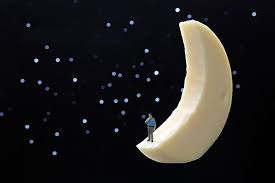 Tom Cruise’s latest blockbuster is called Oblivion. In it an alien conquers Earth by destroying the Moon and unleashing catastrophic climate change. So the Moon is seen as the dominant factor in climate. Until Oblivion Hollywood has been firmly in the man-made climate change [AGW] corner. Of course Hollywood has plenty of money but little credibility.

AGW science probably has as much money as Hollywood to spend, the question is does it have more credibility.

Stephan Lewandowsky is a leading AGW scientist and advocate. Like Cruise Lewandowsky recently had a major project involving the Moon. Lewandowsky’s paper is called:
NASA Faked the Moon Landing—Therefore, (Climate) Science Is a Hoax
An Anatomy of the Motivated Rejection of Science

This paper is a bad paper. It has been subject to sustained and cogent criticism but the paper’s defects are aptly summed up by the inherent contradiction between its thesis and reality. Lewandowsky’s position is that sceptics are susceptible to conspiracy theories and so could be expected to subscribe to other conspiracies such as the Moon landing being a fake.

There have been 12 humans who have stood on the Moon. Along with the great and recently departed Neil Armstrong, the first who stood on the man was “Buzz” Aldrin. Buzz thinks the climate has been changing for billions of years and today’s climate is no different.  Buzz has a PhD from MIT which ranks him above Lewandowsky in the academic rankings. Likewise the last astronaut to stand on the Moon was Harrison Schmitt. Schmitt thinks natural causes dominate any human effect on climate and that AGW support is political because people are scared they would lose their funding. Schmitt has a PhD from Harvard, so he too outranks Lewandowsky.

So, we have on the one side Lewandowsky saying sceptics are likely not to believe in the Moon landings and on the other side we have two celebrated astronauts with impeccable qualifications and experience, who have actually been on the Moon and who are sceptics. In fact so many of the ex-astronauts and NASA staff who worked on the Apollo missions are sceptics they have formed their own project to oppose the misinformation about AGW.

AGW science not only thinks Moon astronauts didn’t go to the Moon. In a recent talk Lewandowsky’s collaborator, blogger John Cook described the effect humanity has on the climate as being comparable to the Hiroshima atomic bomb. And not just one bomb but 4 bombs going off every second. This orgy of destruction was first raised by the father of all AGW exaggerators, the regularly arrested James Hansen. Hansen had previously said Earth was going to become like Venus, but when that undesirable scenario did not resonate then introduced atomic bombs into the predictions about the fate of the Earth. Hansen said AGW is “…equivalent to exploding 400,000 Hiroshima atomic bombs per day 365 days per year. That’s how much extra energy Earth is gaining each day.”

Energy professor Mike Sandiford also contributed to the general gloom by standardising the Hiroshima effect and calling it the Hiro. So everyone could now calculate their destructive impact on the climate by expressing it in Hiros; as in I had a great last night, it was an 11 Hiro occasion. Or when Buzz Aldrin was walking on the Moon he used about 9 Hiros.

This of course is patent nonsense. A detailed critique of the Hiro has been done by Watts. Watts compares Cook’s 4 Hiros per second to what the Sun does which is 1000 Hiros per second. And that is if one accepts the premise of the Hiro. But what Cook and his predecessors in the Hiro blast-chain don’t consider is that human activity is incremental and does not consist of continuous bomb blasts. They also don’t consider that AGW is wrong, a conclusion which now has the support of overwhelming evidence.

But, for AGW science it’s still Hiros all round and given the warfare context who better to comment than a retired military man. At the latest Climate Commission end of the world gathering former Defence Force chief Admiral Chris Barrie said that due to AGW “There’s a one in two chance that by 2100 there’ll be no human beings left on this planet.”

This is grim news unless of course he was referring to the possibility that all of humanity will immigrate to the Moon just to prove Lewandowsky wrong. Unfortunately given the stern demeanors of both Admiral Barrie and his Climate Commissioner buddy Will Steffen it is more likely he meant all that stands between humanity and extinction is the toss of the coin.

This is delirious alarmism, especially coming from a military man who could be expected to have a more mature and informed perspective. More than anything this sort of extreme hyperbole has undermined AGW science. It is as though AGW scientists know their science is weak so they overcompensate by ramping up the threatened consequences.

Since AGW started nearly every imaginable catastrophe including more lawyers has been predicted to happen due to AGW. The cry of Wolf has been so loud and constant that people have seen through the lies. 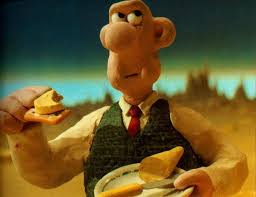 The way AGW science is going it would not be a surprise if Wallace and Gromit’s trip to the Moon is revealed to have been a conspiracy. Cheese anyone?