When inefficient renewable energy power sources need to be subsidised, power users get ripped off. 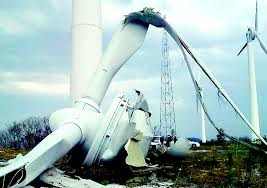 Although there are plentiful supplies of cheap coal and gas for power creation, the Greens don't approve of these clean energy sources.


Although there are many rivers that can be sources of clean hydro-energy, the Greens don't approve of dams.

The Greens DO approve of wind power, but wind power cannot assure base load power.

Juan Antonio Cabrero is bracing for the savings he invested in a solar-energy farm in northern Spain to disappear into light. In 2008 Mr. Cabrero put up his €20,000 ($26,200) life savings and took on a €80,000 bank loan to buy part of the solar farm, pledging his home in nearby Tafalla as a guarantee. Now, because of cuts in renewable-energy subsidies the government is said to be planning, the 60-year-old Mr. Cabrero may lose both his savings and his house. The move could drive tens of thousands of struggling solar-energy companies and individual investors like Mr. Cabrero into default.

It is a poor technology that makes all of the poor poorer.