"Carbon Sense"  Common sense on carbon, food, energy and climate.  Please pass on to media, politicians and the public. www.carbon-sense.com 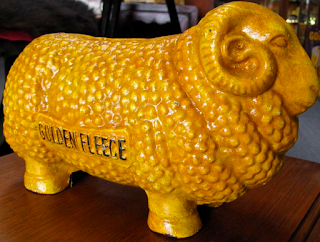 The Carbon Sense Coalition has awarded its Inaugural Golden Fleece Award to Kevin Rudd and coal industry leaders for “flagrant fleecing of community savings in futile ‘research’ on Carbon Capture & Sequestration (CCS) – a costly and complex process designed to capture and bury carbon dioxide gas produced by burning carbon fuels such as coal, oil and gas”.

It is obviously possible, in an engineering sense, to collect, separate, compress, pump and pipe gases, so new “research” is largely a waste of money. Engineers know how to do these things, and their likely costs. But only foolish green zealots would think of spending billions to bury a harmless, invisible, life-supporting gas in hopes of cooling the climate some time in the century ahead.

About 2.5 tonnes of carbon dioxide are produced for every tonne of coal burnt in a power station. To capture, compress and bury it could take at least 30% of the electricity produced, greatly increasing the cost of the limited amount of electricity left for sale - more coal used, increased electricity costs, for ZERO measurable benefits.

We have come to expect stupidity from politicians, but coal industry leaders who agreed to waste money on this should be sued by shareholders for negligence. Maybe they were just drooling at all the extra coal they would sell in order to produce the same electricity?

Kevin Rudd wins this award for “a Flagrant Fleece of $400 million taken from tax payers to fund the fatuous Global Carbon Capture and Storage Institute.” There is little to show for the millions already spent except a lot of receipts for high class salaries, consultants, travel, entertainment and “operational expenses”.

Pumping gases underground is sensible if it brings real benefits such as using waste gases to drive oil recovery from declining oil fields.

This result is not needed as politicians have already invented dozens of ways of doing just that.

Disclosure: Viv Forbes holds shares in a small Australian coal explorer which may benefit if the carbon tax is raised high enough to make Carbon Capture and Burial “economic”.

In defence of Carbon Dioxide.

How often do you hear about "carbon footprint" and "carbon pollution."


Use the most popular online carbon footprint calculator and it's free to use. Calculate CO2 emissions from Cars, Flights, Home and Public Transport.

Google "Carbon Pollution images"  and you will see deliberately deceptive images like:

Why do they lie? The carbon footprint purveyors know that they really mean carbon dioxide emissions and, surely, people using images like the one above MUST know that carbon dioxide is a clolourless gas. Carbon Dioxide is a vital to life plant food.

Remember the Australian Government's use of  similar  deceptive images in their  advertisement parodied by "Say Yes to an Election."

Harrison Schmitt, an adjunct professor of engineering at the University of Wisconsin-Madison, was an Apollo 17 astronaut and a former U.S. senator from New Mexico has co-written an article with William Happer, a professor of physics at Princeton University and a former director of the office of energy research at the U.S. Department of Energy titled:


In Defense of Carbon Dioxide

Of all of the world's chemical compounds, none has a worse reputation than carbon dioxide. Thanks to the single-minded demonization of this natural and essential atmospheric gas by advocates of government control of energy production, the conventional wisdom about carbon dioxide is that it is a dangerous pollutant. That's simply not the case. Contrary to what some would have us believe, increased carbon dioxide in the atmosphere will benefit the increasing population on the planet by increasing agricultural productivity.


They discuss the stalling of global warming and the fact that atmospheric CO2 has previously been at much higher levels. Then continue:

Using energy from sunlight—together with the catalytic action of an ancient enzyme called rubisco, the most abundant protein on earth—plants convert carbon dioxide from the air into carbohydrates and other useful molecules. Rubisco catalyzes the attachment of a carbon-dioxide molecule to another five-carbon molecule to make two three-carbon molecules, which are subsequently converted into carbohydrates. (Since the useful product from the carbon dioxide capture consists of three-carbon molecules, plants that use this simple process are called C3 plants.) C3 plants, such as wheat, rice, soybeans, cotton and many forage crops, evolved when there was much more carbon dioxide in the atmosphere than today. So these agricultural staples are actually undernourished in carbon dioxide relative to their original design.

At the current low levels of atmospheric carbon dioxide, rubisco in C3 plants can be fooled into substituting oxygen molecules for carbon-dioxide molecules. But this substitution reduces the efficiency of photosynthesis, especially at high temperatures. To get around the problem, a small number of plants have evolved a way to enrich the carbon-dioxide concentration around the rubisco enzyme, and to suppress the oxygen concentration. Called C4 plants because they utilize a molecule with four carbons, plants that use this evolutionary trick include sugar cane, corn and other tropical plants.

Read more from the Wall Street Journal HERE.
Posted by Geoff on May 10, 2013 1 comment: