The Beginning Of The End. 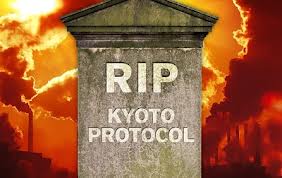 THE BEGINNING OF THE END

I have been neglecting you. Things have quietened down. I am 91 and it is high time I retired, like my friend Will Alexander in South Africa or my major protagonist, former Professor Martin Manning. I thought I would call it a day on Newsletter No 300.

When I began, in 1991 I was still in China. I got involved in commenting on the Reports of the Intergovernmental Panel on Climate Change (IPCC) and I just completed those on the Fifth Report which will surely be my last.

To begin with I was the only critical voice in New Zealand. Last week I attended a packed meeting of the Press Club in Wellington to hear Lord Monckton tear apart the IPCC and everything connected with it. The University scientists will not listen to him. But one of the organisers of the meeting was from the Music Department.

But, surely, we are at the beginning of the end.

The globe has stopped warming; even when measured by the botched-up biased system that they favour.

The Kyoto Protocol is dead. Emissions by former members are in steady decline compared with those from non-members

The support literature has dried up. I used to go to the University every month and photocopy the latest scientific outrage for these Newsletters. The only recent feeble attempt was the rapidly discredited attempt by Marcott to fabricate yet another Hockey Stick at
http://wattsupwiththat.com/2013/03/13/marcotts-proxies/

The “Economist” magazine has expressed doubts

A recent report by the Influential Swedish Research Institute SINTEF at

http://www.sintef.no/upload/Teknologi_og_samfunn/Teknologiledelse/SINTEF%20Report%20A24071
has shown that there is a genuine scientific controversy that should be encouraged; that it is by no means, “settled”

The Emissions Trading scheme is in retreat. European prices have headed for the bottom and they.are about to ditch their scheme. I do not know what has happened to our prices but you can all be assured that whatever happens to the Mighty River Power shares the incentives to go in for windmills and solar power will disappear and we can, eventually have a sensible, economical power policy which will include fracking, coal and small scale nuclear.

But you would hardly think so, listening to all of our politicians, or if you read the newspapers or watch TV. So let me finish by encouraging you all with this article by James Delingpole