Who are the DENIERS now?

Who are the Deniers now?

Geoffrey Bloom’s reverse use of the term “denier” in the European parliament to assertions by European Climate Commissioner Connie Hedegaard that AGW was worse than ever was ironic but was it justified?  (See Video Below.)

Has AGW got worse? Does it exist at all?

In a recent article Fred Pearce had no doubt at all that AGW existed but acknowledged it had not met model predictions. Pearce conceded:

“there is a growing consensus among temperature watchers that the pace of warming in the atmosphere, which began in earnest in the 1970s and seemed to accelerate in the 1990s, has slackened, or stalled, or paused, or whatever word you choose. It may turn out to be a short blip; but it is real.”

This is incontrovertible. In a straightforward analysis Werner Brozek compared all the main temperature records and in all of them there had been a lengthy period of flat or declining temperature. He found this:

For AGW exponents the required period before AGW can be described as affecting climate is at least 17 years. On this basis the 2 most reliable temperature recorders, the satellites systems, UAH and RSS, now officially contradict AGW. This conclusion is unavoidable considering that Werner has included in his graph CO2 which continues its monotonic increase. How can temperature have “slackened, or stalled, or paused, or whatever word you choose,” to quote Pearce, when CO2 is continuing to rise?

However Pearce does not accept that AGW has stalled just because temperatures appear to have stopped rising. He says:

“According to the National Oceanic and Atmospheric Administration (NOAA), all 12 years of the new century rank among the 14 warmest since worldwide record-keeping began in 1880. The second-warmest year on record, after 1998, was 2010.”

1998 was a significant year. It is just after a climate shift occurred which was opposite in phase and temperature effect to the well documented 1976 climate shift which caused an increase in temperature. It was also the year of a particularly big El Nino although, not as Pearce implies, the biggest. 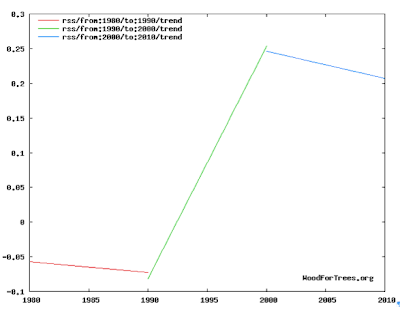 In any event the temperatures of the modern era are not warmer than past temperatures such as during the Medieval Warming Period as McShane and Wyner found in their seminal statistical analysis of the data relied upon by Michael Mann.

The second reason Pearce uses to dismiss the current hiatus in temperature is by reference to Trenberth’s new paper. Trenbert is famous for admitting in the CRU emails that:

“The fact is that we can’t account for the lack of warming at the moment and it is a travesty that we can’t.”

The ‘missing heat’ refers to the fact that the estimates of energy by AGW theory predict more heat in the system than is being reflected in temperature. The most dominant explanation is that this energy/heat is being ‘stored’ at the bottom of the ocean. Trenberth couldn’t find it there before but in his new paper, after reanalysing the same data he can now find it.

For Pearce the pause in temperature increase does not mean AGW has stopped or doesn’t exist; it means the heat is still here, at the bottom of the ocean and will appear sometime in the future. 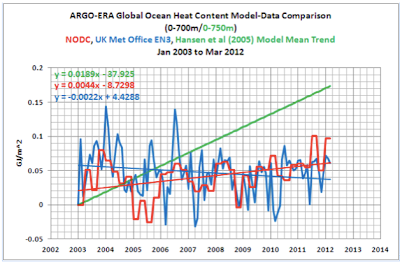 The unadjusted ARGO data is in blue, the adjusted in red and the model predictions in green.

The unadjusted data is supported by the trend in sea surface temperatures which also show cooling: 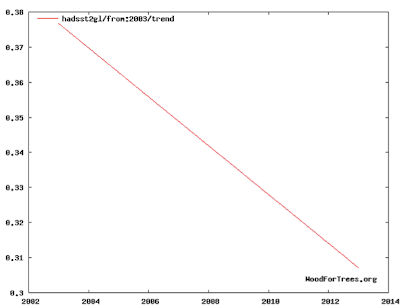 The issue is, how can heat be accumulating at the bottom of the ocean from atmospheric warming when both the upper part of the ocean and the ocean surface are cooling?

Roy Spencer has discussed this issue. Spencer describes what may be happening:

“Warming of the deep ocean originally caused by radiative forcing of the climate system cannot literally bypass the surface without some effect on temperature. But that effect might be to keep some cooling process from causing an even steeper dive in temperature.”

For Spencer the deep ocean appears to be warming because the top 700 meters of the ocean and surface is cooling. Heat isn’t being stored at the bottom of the ocean; the cooling hasn’t yet reached there.

The evidence against AGW is now becoming cogent. While one can wish Bloom had not resorted to the term “denier” it does seem as though the shoe is now on the other foot.