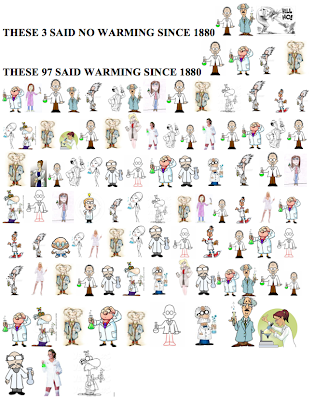 The alarmists keep repeating the old line of "consensus."

They say that 97% of scientists agree that the world has warmed.

Using the bottom of the Little Ice Age until now,it is surprising that 3% didn't agree that the world had warmed.

The question asked by Doran, and Zimmerman (2009), Examining the Scientific Consensus on Climate Change, Eos Trans. AGU, 90(3) was "When compared with pre-1800s levels, do you think that mean global temperatures have generally risen, fallen, or remained relatively constant?"

However the 97% was derived from a flawed study. See Here, here, here and here.

What if the sceptics start claiming the consensus?

Well, as the sceptical side of the debate is science based, you won't hear sceptics claiming a consensus. Consensus is a political term, not a scientific term.

Having said that, James Taylor in Forbes.com uses the "C" word. (link)


It is becoming clear that not only do many scientists dispute the asserted global warming crisis, but these skeptical scientists may indeed form a scientific consensus.

Don’t look now, but maybe a scientific consensus exists concerning global warming after all. Only 36 percent of geoscientists and engineers believe that humans are creating a global warming crisis, according to a survey reported in the peer-reviewed Organization Studies.

By contrast, a strong majority of the 1,077 respondents believe that nature is the primary cause of recent global warming and/or that future global warming will not be a very serious problem.


As the late Israeli diplomat and politician Abba Eban said: "A consensus means that everyone agrees to say collectively what no one believes individually. " 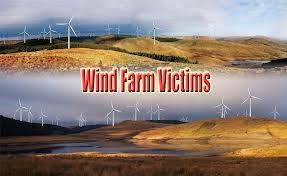 The Prince of Flimflam is none other than Prof Tim Flannery. Anyone who has read Wes Allen's The WeatherMakers Re-examined (link) know that Prof Flanney's book is shown to contain

Now Professor Tim is at it again.


Piers Akerman reporting in the Australian:

CLIMATE commissioner Tim Flannery has dismissed concerns about possible health effects from wind farm noise, saying illness may be caused by stress or residents being "sick with envy" at not getting payment for turbines on their properties.

Speaking at a nurses' forum yesterday about the relationship between climate change and health, Professor Flannery fended off a question from a regional Victorian nurse who said she supported wind energy but was seeing many patients with health problems attributed to a nearby wind farm.

"What I've read and experienced is that there are no proven health impacts directly from wind-related noise," Professor Flannery said. "What we do see is people who are adversely affected by it through perhaps stress or tension or worry."

Perhaps Mr Flannery hasn't read enough. Or could it be that he is prevaricating to boost his $180,000 part-time Panasonic Climate Commission position.

Some papers from Scientific Sources:

Conclusion
There is a need to take the unique environment into account when planning a new wind farm so that adverse health effects are avoided. The influence of area‐related factors should also be considered in future community noise research.


The online version of this article can be found at http://bst.sagepub.com/content/31/4/334

WHEN American noise expert Robert Rand turned up to work in Maine, in the US northeast, in April to investigate the impact of wind turbines on nearby residents he was literally blown away.

Not only did Rand's readings confirm many fears in the community, he claims to have become an unwitting victim himself.

A member of the Institute of Noise Control Engineering and a technician with 30 years' experience, Rand was working for a philanthropic donor wanting to investigate why wind turbines were causing so much concern.

Rand told The Australian yesterday his experience had been unexpected. He had measured the noise from wind turbines on many previous occasions without difficulty but, in testimony to the State of Maine Board of Environmental Protection in July, Rand said the turbines had delivered "a miserable and unnerving experience".

Over to you, Mr Flannery. As Australia's $180,000 part-time Panasonic Climate Commissioner, surely you should be more up to date on the recognised health effects of Wind Farms.
Posted by Geoff on March 28, 2013 No comments: