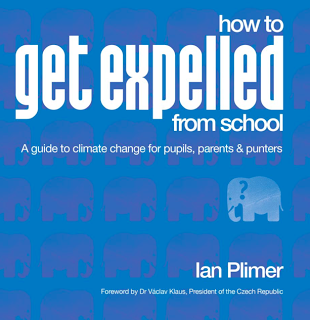 NO CARBON TAX Climate Sceptics blog has previously written of Prof Ian Plimer's "How to get Expelled from School..." eg LINK)


Peter Mungo Jupp recorded one of the book launches and NCTCS thought that it would be good to revisit Professor Plimer's guide to Climate Change for pupils, parents and punters.

Email ThisBlogThis!Share to TwitterShare to FacebookShare to Pinterest
Labels: How to get expelled from school, Ian Plimer, Peter Mungo Jupp, Sea level rise

University Climate Researcher to be investigated for unprofessional conduct

University Climate Researcher to be investigated for unprofessional conduct.

Lord Monckton, who spoke to 150 scientists and members of the public at the UTAS last week, has complained, in an interview with the Sunday Tasmanian last week, Press had misrepresented both Climate Science and what Lord Monckton said in his talk.

The investigation comes under the Australian Code for the Responsible Conduct of Research.

Professor Rathjen’s letter to Lord Monckton says, “…the processes will be followed rigorously!”

The Vice Chancellor added that the University strongly supported a culture of courteous, critical dialog on all matters of academic and public interest.