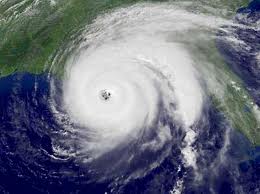 Subject: D7) How much energy does a hurricane release?

Hurricanes can be thought of, to a first approximation, as a heat engine; obtaining its heat input from the warm, humid air over the tropical ocean, and releasing this heat through the condensation of water vapor into water droplets in deep thunderstorms of the eyewall and rainbands, then giving off a cold exhaust in the upper levels of the troposphere (~12 km/8 mi up).
One can look at the energetics of a hurricane in two ways:
It turns out that the vast majority of the heat released in the condensation process is used to cause rising motions in the thunderstorms and only a small portion drives the storm's horizontal winds.

And this was only hurricanes. There are 180 thunderstorms each year plus normal convection and evaporation. The IPCC gives an annual figure of 17Wm-2 for convection loss and 80Wm-2 for latent heat loss, but these have been recently increased to 20Wm-2 and 85Wm-2

The enormous amounts of energy involved in convection and latent heat exchanges are removed in one place and deposited elsewhere, partly in the oceans, partly reducing cooling at night and partly, as Landsea says, radiated to space. Their behaviour, dependent on the chaotic properties of fluid flow, is unpredictable. They conceal any possible much smaller effects of greenhouse gases which could never be identified. The models are not only wrong. They are irrelevant. 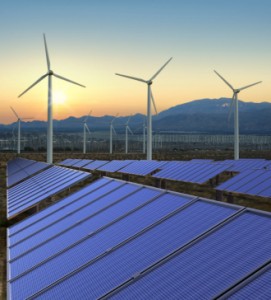 From the Wall Street Journal:

More than a decade ago, Germany and Spain created similar laws to aggressively promote the adoption of renewable energy. The two countries were again marching in step on Thursday—this time to fix a web of subsidies and compensations they created for green energy that had the unintended effect of driving up household electricity bills.

With Spain in the grips of recession, the government wants to lower consumers' light bills. In Germany, Chancellor Angela Merkel faces an election in September and hopes to win points with voters by putting a stop to rising electricity bills.

The Spanish cut in the subsidies are reported by Reuters:


The Spanish Parliament approved a law on Thursday that cuts subsidies for alternative energy technologies, backtracking on its push for green power.

That measure, along with other recent laws including a tax on power generation that hit green energy investments especially hard, will virtually wipe out profits for photovoltaic, solar thermal and wind plants, sector lobbyists say.

The Reduction in the German subsidies from The Wall Street Journal:


Fearing a voter backlash from anger over the lopsided financing of green energy, Ms. Merkel’s government on Thursday proposed putting a cap on the green-energy surcharge until the end of 2014 and then restricting any rise in the surcharge after that to no more than 2.5% a year. The government also plans to tighten exemptions, which would force more companies to pay, and achieve a cut in green subsidies of €1.8 billion ($2.42 billion). The plan is a quick fix pending comprehensive reform after the election, government officials said.

An activist in the campaign against Wind and Solar has advised that we should not use the term Renewables anymore, but always substitute the term Unreliables.