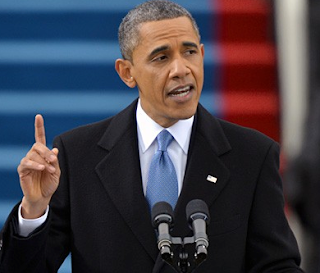 
and we addressed his points.


Today, we have Tom Harris, the  Executive Director of the International Climate Science Coalition (ICSC) addressing those points in a much more erudite way.

From  The Canada Free Press:

In his Inaugural Address, U.S. President Barack Obama showed that his administration’s approach to climate change and energy is both backwards and dangerous.

If there were indeed an increased threat from “raging fires, and crippling drought, and more powerful storms”, as the President implied, then America would need vastly more affordable energy sources to prepare for and cope with these hazards. Yet, in discussing the solution to these dangers, the President boosted, not the most reliable and least expensive energy technologies such as coal-fired electricity generation, but the least reliable, and most expensive sources. It was certainly an understatement to say, as he did in Monday’s speech, “The path towardssustainable energy sources will be long and sometimes difficult.”

The sustainable energy sources Obama has most in mind are wind and solar power. He presents the move to these technologies as an economic benefit to the United States. In his address the President said that America must lead in the transition to a new energy economy. “We cannot cede to other nations the technology that will power new jobs and new industries – we must claim its promise,” said Obama. “That is how we will maintain our economic vitality…”

No, that is how you ruin a country’s economy. Sustainable energy sources have had decades to mature. Yet, to use energy from wind and solar power still requires that consumers pay between three and ten times the price of energy from conventional sources like coal, oil, natural gas and nuclear. In addition, it was necessary for the U.S. Government to funnel billions of dollars into subsidies for “green energy” technologies just to keep them afloat during Obama’s first term in office, and some failed even then. Data from the Energy Information Administration indicates that in 2007, 2008 and 2009, the U.S. added more non-hydroelectric renewable capacity than was added innatural gas, coal, oil, and nuclear. This is a dangerous trend that must be reversed as soon as possible.

No country, the U.S. included, can afford to sustain this indefinitely. And no industrialized society has any chance of successfully replacing significant amounts of conventional energy supplies with intermittent and diffuse sources such as wind and solar. We need massive quantities of reliable, high quality power to run steel mills, Internet servers and our transportation system, even when the wind drops or a cloud passes in front of the sun. Trying to base a modern energy-intensive society on what most people think of as “sustainable energy sources” is not sustainable.

Energy independence is not a good reason for promoting these technologies either.Energy independence is more easily–and much more cheaply–attained by exploiting abundant national fossil fuel reserves and those of close allies such as Canada. Then, some of the wealth created can be spent on research into potential new energy technologies.The reason the Obama administration boosts ineffective power sources and is working to dismantle America’s cheapest energy source, coal, is simple. They want to base U.S. energy policy on the unproven and increasingly improbable hypothesis that emissions of carbon dioxide (CO2) from fossil fuel combustion is a major contributor to dangerous climate change that humanity is supposedly causing.

Obama alluded to this in his Inaugural Address, saying, “Some may still deny the overwhelming judgment of science…” He was speaking about the common belief that climate science is somehow “settled” in favor of the catastrophe theories of Al Gore and the United Nations Intergovernmental Panel on Climate Change (IPCC).

But it has never actually been demonstrated that any consensus about the causes of climate change exists among scientists who specialize in this research, even within the IPCC itself. Polls that have attempted to make this connection either asked the wrong questions or are so methodologically flawed that they cannot be taken seriously. Yet, the U.S. and most other developed nations continue to base climate and energy policies on the conclusions of IPCC reports even though they have been seriously discredited.

Citing thousands of peer-reviewed scientific papers, the Nongovernmental International Panel on Climate Change (NIPCC) presents a more realistic perspective. It shows how the IPCC have ignored or misinterpreted much of the research that challenges the need for CO2 controls. The NIPCC concludes that much of the science being relied upon to create multi-billion dollar climate policies across the world is almost certainly wrong.

Even if the IPCC and Gore were right, Obama’s expensive energy policies would have little climatic impact as long as China, which is planning to build 500 coal‐fired plants over the next ten years, India and other developing nations continue on their current path.

President Obama was right, however, to say that we have a responsibility to “respond to the threat of climate change, knowing that the failure to do so would betray our children and future generations.”
History is replete with examples of societies that collapsed because they did not properly respond to the threat of climate change. The Greenland Vikings and the pre-Incan civilizations in South America died out for this reason. While modern societies are more robust due to technology and international trade, we too must get ready for climate change or suffer the consequences.

But crippling America in a vain attempt to stop climate change through misguided energy policy betrays everyone.

And Mr Combet, crippling Australia in a vain attempt to stop climate change is a betrayal of your country

To Ski or not to Ski! The Importance of peer-review


One of the major challenges when studying climate change effects is to establish the relationship between physical impacts and environmental changes on the one hand, and between these factors and impact on humans on the other hand.

An international study enjoying the participation of the Polytechnic University of Catalonia has investigated the particular case of Andorra and has demonstrated a predicted increase in temperatures as a result of climate change will shorten the ski season in the resorts of the principality. (Link)


A new peer-reviewed paper from the Journal of Climate Research: (Link)

We project a reduction in ski season length and a drop in the number of skiers, especially in the lowest elevation ski resort of this region. Moreover, this work indicates that snowmaking cannot completely solve the problem of ensuring snow cover at low elevation ski resorts, and should only be considered as a suitable short-term strategy, rather than as a sustainable long-term adaptation strategy.

The paper was published in October.  By February, a report from sott.net:

Road and lift closures. Evacuations and residents confined to their homes. The storms that have brought over 7 meters of snow to the Pyrenees since the New Year don't seem to be putting a smile on ski resort director's faces. Quite the opposite in fact. Some are asking if they were not better off with last season's snow drought. Yesterday at Mourtis, a resort where skiers are more familiar with grass and mud, the piste bashers were running non-stop and the upper lifts have barely opened all week.