This NCTCS blogger received a letter from Greg Combet. (See screen shot below) It began:

Are you Australia's biggest b@llsh!t artist? Some-one who is peddling a tax based on a hoax, on a falsified hypothesis?


What were you thinking of, sending an email to an address starting with sceptic@......

You start off asking about POTUS' address.

Then you wrote:  "Obama called on Congress to put in place a market-based mechanism to deal with carbon emissions."

Why are we taxing carbon dioxide? To stop runaway warming? The temperature has been static for 16 years now (link) Meanwhile the future link to the European price on essential CO2 is collapsing (link) You're so wrong, wrong, Greg Combet. (link)

You're supposed link to "facts" on China didn't work but here are some facts on  the major role of coal in China's power generation.


Will you share this video and show people the truth?

PS. Can you help us defend Australia from the economic devastation the carbon dioxide tax will cause by chipping in $10?  (see bank account details above.) We can't afford to fall behind the rest of the world on this issue. 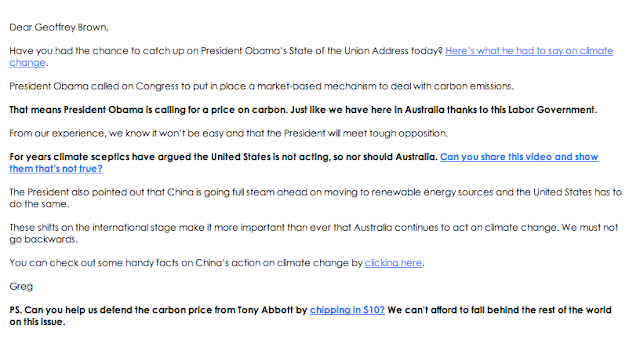 The Major Role of Coal

In an article on PJ Media, the Executive Director of the International Climate Science Coalition (ICSC) Tom Harris and New Zealand based Consulting Engineer Bryan Leyland advise President Barack Obama to choose his next Secretary of Energy more wisely.

While we need to reduce real pollution where it is a problem, [ex-Secretary of Energy] Chu must have known that CO2 is not a pollutant. It is essential to life on Earth, and its increasing concentration has led to greater agricultural productivity.

Chu should have also known that coal, properly mined, prepared, and used, is anything but a nightmare. Coal played a major role helping power America to prosperity and world leadership during the 20th century. It still provides about 50% of all electric power generated in the United States today. The U.S. has enough coal left in the ground to last for centuries. It is by far the least expensive source of power, and modern pollution control has made coal-fired electricity stations cleaner than ever before.

After reproducing Chu's resignation letter which was "riddled with sensationalism and basic errors," they continue:


It is not just in America that Chu has been pushing this dysfunctional energy plan. Through the newly launched Clean Energy Ministerial, the U.S. Department of Energy is working to “speed the spread of renewable power and mobilize talent from around the world to advance the clean [i.e. low CO2] energy revolution.

Scientific studies, many of which are summarized in the Nongovernmental International Panel on Climate Change, demonstrate that none of this will have significant impact on our planet’s climate. But it will certainly have a devastating impact on the U.S. and world energy situation if it is not stopped soon.

They point out that renewables cost 3-10 times more than reliable energy from conventional sources such as coal, oil, natural gas, and nuclear.