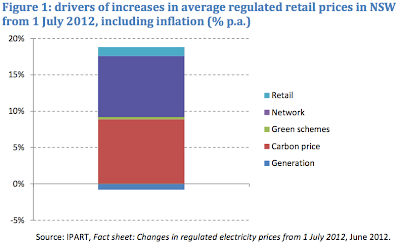 The Australian Industry Group has long considered that market-based approaches to the reduction of Australia’s contribution to greenhouse gas emission are most likely to meet national objectives at least cost. At the same time we have a number of concerns about the design and implementation of the carbon tax. We are particularly concerned about the initial fixed prices, which are high by international standards. This imposes an additional cost burden on Australian business at a time when local and global conditions are highly challenging due to a variety of other factors. Recent developments in the local and global economies and in international carbon markets show that our concerns were well-founded and remain valid.


AIG chief executive Innes Willox said the impact of the carbon tax on "niche groups" such as food manufacturers is "probably greater than anticipated".

NCTCS blog is surprised that Food Manufacturers are considered a "niche group" by AIG. Surely food is almost as vital to life as the carbon dioxide that the Green Gillard Government insists on taxing.


But with Opposition Leader Tony Abbott promising to axe the tax if he wins office, some said the carbon tax is not as bad as they first feared.

Maybe the opposition intends to axe the tax but they have indicated that they would be signatories to Kyoto 2 Protocol (link) and  they have a Direct Action plan to mitigate carbon dioxide emissions which will needlessly cost the nation $3.2 Billion. The NO CARBON TAX Climate Sceptics (NCTCS) party are standing against any useless waste of taxpayers' funds on unnecessary carbon schemes.

NSW service station operator Craig Glasby expected it would add 15 per cent to his energy costs but now estimates the carbon tax will add about 11 per cent.

Mr Glasby, who also operates a Foodworks supermarket from the Central Coast, said he has introduced low-wattage lighting and other "green" appliances to try and lower his energy costs

"I still think it's an impost that we should not have to pay."

The Telegraph also detailed the pain of another business man:


Another small business owner, Greg Northrop, estimated his company power bill had increased by $120,000 a year to almost $700,000.

"We put out a letter to our customers and told them about the carbon tax effect and we were told quite clearly they were not going to accept price increases," Mr Northrop, who runs electrical cabling manufacturer Tycab Australia on Melbourne's outstkirts, said.

"Our biggest competitors are Chinese companies, who are already benefiting from the high Australian dollar and the devaluation of their currency.

All that pain for how much gain? According to Joanne Nova (link) in a piece subtitled "Welcome to Futility island."

No, not Spiffy, Jo! A tragic unnecessary impost on Australian businesses and in fact all Australians who eat food or use energy.