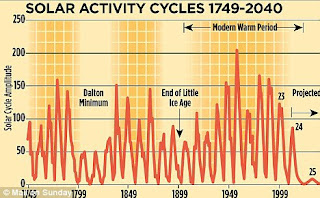 This blog has frequently addressed two themes:
Atmospheric Carbon Dioxide continues to rise (presently at 395 ppm according to the adjacent Climate Widget.) Australia has had two cooler summers followed by the current warmer summer which reminds the NCTCS blogger of the summers of his youth.

In the Northern Hemisphere, however,  they are suffering cold winters. Ice Age Now writes

and the UK Telegraph conjectures:

It’s snowing, and it really feels like the start of a mini ice age.


Something is up with our winter weather. Could it be the Sun is having a slow patch?


“If the sun really is entering an unfamiliar phase of the solar cycle, then we must redouble our efforts to understand the sun-climate link,” notes Lika Guhathakurta of NASA’s Living with a Star Program.

The Northern Hemisphere is cold and could get colder as they face a new "maunder" minimum.
Because of the cold winter and the high energy prices, Europe is facing a pollution problem. Not the false carbon dioxide pollution but particulate pollution.


Burning solid fuel yields particulate pollution - solid particles smaller than a red blood cell which have been implicated in 30,000 deaths in the US and 2.1 million deaths world wide per year. .  "Particulate pollution is the most important contaminant in our air. ...we know that when particle levels go up, people die.  (I Can't find original link -34 duplications in google search.)


Via Reuters we learn that Greece raised Energy prices by 15% this month.


Tens of thousands of trees have disappeared from parks and woodlands this winter across Greece, authorities said, in a worsening problem that has had tragic consequences as the crisis-hit country’s impoverished residents, too broke to pay for electricity or fuel, turn to fireplaces and wood stoves for heat.

As winter temperatures bite, that trend is dealing a serious blow to the environment, as hillsides are denuded of timber and smog from fires clouds the air in Athens and other cities, posing risks to public health.

And In Germany Spiegel on Line reports:

With energy costs escalating, more Germans are turning to wood burning stoves for heat. That, though, has also led to a rise in tree theft in the country's forests. Woodsmen have become more watchful.

With snow blanketing the ground, it's the perfect time of year to snuggle up in front of a fireplace. That, though, makes German foresters nervous. When the mercury falls, the theft of wood in the country's woodlands goes up as people turn to cheaper ways to heat their homes.

The problem has been compounded this winter by rising energy costs.

Green energy is expensive energy. In Europe, prices are rising and unintended consequences have followed.

Last month, I took a six-hour train ride from Munich to Berlin. As we swept through the German countryside, I noticed a great deal of firewood.

It was piled high, close to houses and outbuildings. It was stacked in long rows against stone walls and fences. My guess is that we burn a comparable amount of wood in Canada and the US during the winter, but I hadn’t expected to see so much of it in a nation as environmentally conscious as I imagine Germany to be.