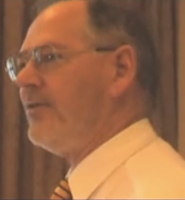 The media has recently been reporting apparently unprecedented heat in Central Australia in the context of human-caused climate change. But is the current heat wave, with extended periods of days above 40ºC at Alice Springs really unprecedented? To answer this question it is necessary to examine the data.

The airport site is the basis for conclusions being drawn that warming has occurred during the second half of the 20th century. The 95th percentile for the monthly mean maximum temperature data is 39.0ºC; five years exceeded this value making the hottest Januarys 1994, 1999, 2004, 2006 and 2008, all in recent decades. The warmest year (2006 with a monthly mean of 40.0ºC) started with 12 consecutive days above 40ºC and with a subsequent 4 days above 40ºC. To date, 2013 is up with these previously hot months having experienced the first 14 days with temperatures reaching 40ºC or above. On these data alone one might conclude central Australia has been getting hotter.

When we plot the monthly mean data for both sites an extended pattern of cooling then warming emerges. Temperatures are now only recovering to the values of the late 19th century. 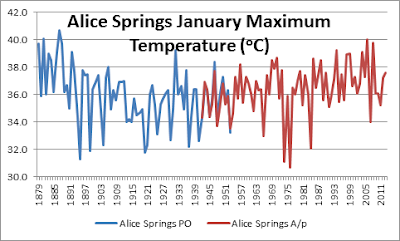 It is unfortunate that the Australian government has not considered it sufficiently important to digitise and make publicly accessible all of the meteorological records from earlier years. The Bureau of Meteorology website has a range of important statistics about changing climate but most are generated from data gathered after 1910.  As a consequence, statements based on the post-1910 data that suggest an ongoing warming trend are incomplete and likely misleading.

There is fragmentary data (such as the above for Alice Springs) and much anecdotal evidence to suggest that during the late 19th century over central Australia, western New South Wales and South West Queensland the temperatures were as warm as or warmer than for recent decades. Without ready access to the existing earlier meteorological data a faulty picture of a warming Australian climate is portrayed in official statements.

Based on the Alice Springs data, a coming period of sharp cooling cannot be discounted.

Principal Consultant, Australasian Climate Research
William Kininmonth is a consulting climatologist who worked with the Australian Bureau of Meteorology for 38 years in weather forecaster, research and applied studies.  For 12 years until 1998 he was head of its National Climate Centre.  Between 1998 and 2002, he consulted to the World Meteorological Organization, including coordinating an international review of the 1997-98 El Niño event and preparation of a WMO publication, Climate into the 21st Century (Cambridge).

William Kininmonth is author of the book, Climate Change: A Natural Hazard (Amazon).
Posted by Geoff on January 15, 2013 5 comments: