Get-up  is an advocacy  organisation funded by the union movement (link) with funding tied to the shadowy billionaire, George Soros (LINK)   Even the left-wing Crikey has been critical of GetUp's strange bedfellows (LINK)

Meanwhile as Getup says there is a growing mountain of evidence that the world is warming.


The reality is confronting; we're currently on track for at least 4°C more warming


Some of that Growing Mountain:

Tale of two hemispheres: Before the rabid alarmists start blaming Australia's heat wave on man's emissions of the vital-to-life carbon dioxide, NCTCS blog recommends that they look at the rest of the world.
Atmospheric CO2  It has been 6-10ºC warmer in previous interglacials
Chill in China  In near tropical Southern China.
North China Cold snap This was the day three Japanese tourists died of exposure on the Great Wall.
UK Freezes   Freezing UK weather closes schools and slows trains
Russia and Ukraine  Deep freeze spreads across Russia
Middle East The greatest snowfall since 1992 saw 10 to 15 centimetres (4 to 6 inches) cover Jerusalem and surrounding cities in a blanket of white

The trouble with propagandists like GetUP, they do not tell the truth.

Eg - That link "Get a glimpse of what we're facing..." goes to a slide full of untruths and devious statements.

Our new normal - The science is clear, the world is warming.

Is the science clear?  The IPCC has been discredited by the ClimateGate emails.

Melbourne Physicist Dr John Costella was a believer in the greatest hoax ever perpetrated on man, the falsified AGW hypothesis. Then he started to examine the ClimateGate emails and soon realised the fraud and deception of the IPCC scientists. He published his step by step analysis and it can be found HERE.

It is helpful to know that the IPCC was set up to PROVE that carbon dioxide was causing runaway global warming and not to examine and evaluate all the evidence.

Canadian Journalist Donna Laframboise has exposed flaws in the IPCC assessment reports in her book "The Delinquent Teenager..."  Climatologist Professor Judith Curry  reviewed Donna's book and said "My personal reaction as a scientist is to be very thankful that I am not involved in the IPCC.  I already feel duped by the IPCC (I’ve written about this previously), I am glad that I was not personally used by the IPCC."  Donna's book is getting published around the world. Pierre Gosselin today writes of the book's release in Germany.

The science is clear.

Clear as mud, the last IPCC assessment report was written by  ~ (Rudd  said 3000. NO!) The IPCC says in its flyer for its Fourth Assessment Report (4AR)
But, as John McLean reveals,  the truth is closer to - wait for it - FIVE!  (link - pdf)


The second draft of chapter 9, the last draft available for review by individuals, received comments from 55 people and 7 governments. Of these 62 only 5 reviewers explicitly endorsed the overall chapter

Meanwhile,  31487 scientists including 9029 with PhDs disagree with the findings (LINK)

However science is NOT about numbers. It is about the scientific method (link)

The AGW hoax has been proven false.

Other falsities and devious statements in GetUp's disgraceful link.

The hottest average maximum temperature ever recorded across Australia – 40.33 degrees, was set on Monday

Note their wording - however, the highest maximum temperature ever recorded in Australia is 50.7º in Oodnadatta, January 1960.

This next one is true....well, er if you use massaged figures - According to the National Climate Data Centre, nine of the 10 hottest years on record have been since 2000 (the other is 1998) However Getup don't tell you that that is using massaged data for the contiguous United States.

However if you look at the graph HERE you will see the unaltered figures which show a very different picture.


"The fraudsters at NOAA are making hay with claims that 2012 was the hottest year ever, while global temperatures continue to slide. December was the 17th coldest in the RSS satellite record."


But over the weekend, NASA was forced to revise its findings after fellow blogger Steve McKintyre, of climateaudit.org, found a glaring Y2K bug in the methodology that led to them. Now the inconvenient truth is that:

- Three of the five hottest years on record occurred before 1940; and

- Six of the top 10 hottest years occurred before 90 percent of the growth in greenhouse gas emissions during the last century occurred.

The Bushfire CRC (Cooperative Research Centre) says large areas of southern Australia, from the east coast to the west coast, face “above  average fire potential” in the summer of 2012-13.

This is because we used to control burn the undergrowth until the rabid red greens got on councils and stopped control burns. The aboriginals, before white immigration knew the wisdom of control burns.

The last four months of 2012 - globally - were the hottest on record. (British Met Office)

Whooooops! Another Whopppper! The British Met Office on Christmas eve (hoping it would disappear due to the festive season) announced that global warming had stalled (link)


"Labour MP Graham Stringer accused the Met Office of “burying bad news” by releasing the data on Christmas Eve and said it should give up climate change forecasts as well as long-term predictions."

The truth is the UK Met Office revealed that global warming has stalled since 1998. (LINK)

The trouble is the Main Stream Media have been pushing the falsified hypothesis and the public is not getting the truth. With whoppers from GetUp it is hard to get the truth to the public.
Posted by Geoff on January 11, 2013 No comments: 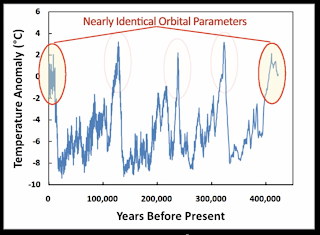 The maximum interglacial temperature over the past 340,000 years were between 6ºC and 10ºC above present day values. From paper in Nature "Evidence for former interglacials in East Antarctic ice cores",  Sime et al.

Dr Sherwood Idso.
Center for the study of Carbon Dioxide and Global Change.