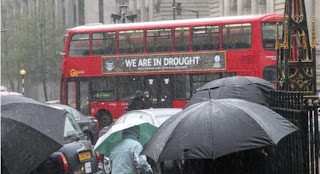 
There could be few more apt epitaphs for the year now ending than a recollection of the headlines in April that greeted a stark warning from the Environment Agency. Fuelled by the predictions of the climate-change-obsessed Met Office (and the the official policy, since 2007, of the similarly fixated EU) that we will have “hotter, drier summers” for decades to come, the agency foretold that the drought conditions of the early spring were likely to last “until Christmas and perhaps beyond”.

It is reminiscent of the predictions made down-under by the  apparently absent Panasonic Climate Change Commissioner, GAIA worshipper and waterfront dweller Tim Flannery


TIM Flannery has just been hired by the (Green) Gillard Government to scare us stupid, and I can't think of a better man for the job.

This Alarmist of the Year is worth every bit of the $180,000 salary he'll get as part-time chairman of the Government's new Climate Commission. In 2005, Flannery predicted Sydney's dams could be dry in as little as two years because global warming was drying up the rains, leaving the city "facing extreme difficulties with water".

In 2007, Flannery predicted cities such as Brisbane would never again have dam-filling rains, as global warming had caused "a 20 per cent decrease in rainfall in some areas" and made the soil too hot, "so even the rain that falls isn't actually going to fill our dams and river systems ... ".

In the United Kingdom, Alarmists made similar predictions:


The prophecy was swiftly followed by the wettest late spring, the wettest summer, the wettest autumn and the wettest Christmas we have ever known – eight months of near-continuous rain and floods amounting to England’s wettest year since records began.


2012 has been the year when long-dominant belief systems and fondly held illusions have been conspicuously falling apart, portending a time of agonising reappraisal when familiar certainties give way to greater realism and painful rethinking.

As this NCTCS blog has repetitively reported, the hoax of the falsified Man-made Global Warming hypothesis has been exposed, destroyed and despatched; Christopher Brooker adds:


Just as significant this year have been the signs of glimmerings of reality breaking in on the delusions that go with the long-dominant conviction that the world is in the grip of a changing climate that we somehow have the power to reverse, if only we are prepared to subordinate every aspect of national policy to doing so and to change almost every aspect of our lives.    .........

As the scientific case for man-made climate change fell apart, in a welter of scandals which showed how ruthlessly the evidence had been fudged and manipulated, the real global warming disaster, as I argued, was the political legacy it was leaving us with.


May I remind readers that, as a further assist to the disintegration of the alarmists' propaganda, at least in Australia, our NCTCS associated body, the Lord Monckton Foundation, will be presenting Lord Christopher Monckton around Australia and New Zealand  from 31 January to 20th April 2013. (Tour details.)