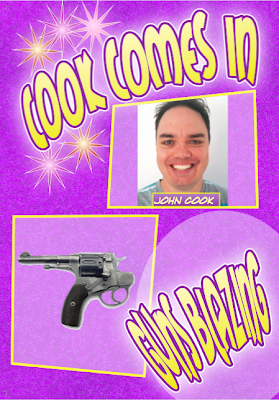 I recently had an article contradicting John Cook’s paper on the alleged 97% consensus of scientists supporting man made global warming (AGW) published at the Newcastle Morning Herald. After coming in all cap-guns blazing in the comments and being nicely rebutted by Directeur Sportif and yours truly, Cook was given a right of reply.

Cook’s right of reply relies largely on the customary comparison of sceptics with tobacco deniers. I deal with that furphy in the comments where I note:

This tactic is used by AGW supporters frequently such as when they talk about genuine pollution issues and then introduce AGW so AGW is associated wrongly with real pollutants.

However Cook does not just rely on the consensus, he also is lavish in his descriptions of the evidence for AGW; in the comments to his Reply Cook says:

On the contrary, Anthony, the science on human-caused global warming is even stronger than the science about smoking. It's based on many lines of evidence - satellite measurements of outgoing radiation, surface measurements of downward radiation, measurements of a cooling stratosphere while the troposphere warms, winters warming faster than summers, etc. Attribution study after attribution study. Human fingerprints are being observed all over our climate. Consequently, there is a strengthening consensus in the peer-reviewed literature and in the scientific community.

Our paper doesn't touch on whether global warming will be catastrophic - the only hyperbole and exaggeration is in your characterisation of our research.

This is clearly incorrect, Cook is a catastrophist, and my only “characterisation” of his and all research supporting AGW is that it is wrong as these many posts at this blog demonstrate. In addition the evidence for AGW is non-existent. For instance Cook uses the term “Human Fingerprints”. The term “fingerprint” comes from Figure 9.1 of AR4: 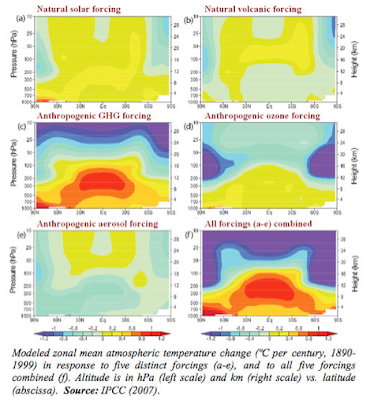 The Figure purports to show the existence of a Tropical Hot Spot, THS, caused by CO2 heating which would have a different fingerprint from other sources of heating. However the THS does not exist.

The non-existence of a THS is not only a refutation of Cook’s claim about “fingerprints” but AGW generally. This is also the case with the absence of Stratosphere cooling: 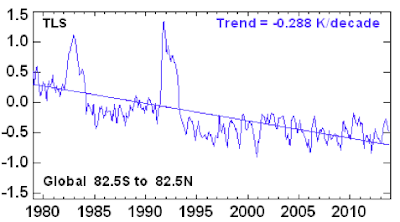 The graph is plain, clearly showing after the Pinatubo eruption in 1991 that the Stratosphere has slightly increased in temperature after re-cooling from the heating caused by Pinatubo.

Just like the consensus, which is false science in any event, all of Cook’s so-called “fingerprints” and “attribution study after attribution study” are non-existent.
Posted by Geoff on December 02, 2013