The (less than) skillful predictions of Climate Science. 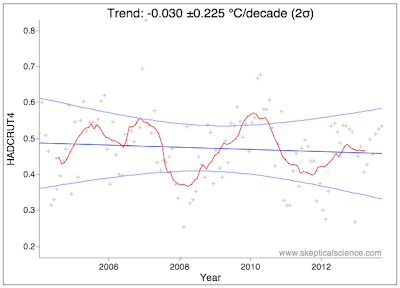 
The skillful predictions of climate science

In 2007, a team of climate scientists from the UK Met Office led by Doug Smith wrote a paper “Improved Surface Temperature Prediction for the Coming Decade from a Global Climate Model”, published in the journal Science.  Although published in 2007, the paper made predictions for the decade 2004-2014. (Presumably the work was started around 2004 and it took some time for the paper to be published). The paper made claims about the “skill” of the model, for example “Having established the predictive skill of DePreSys…”

The Smith et al paper made the following specific predictions: Note that at that time, 2007, the warmest year was thought to be 1998; subsequent adjustments to the method made 2005 warmer than 1998.

As we come to the end of 2013 we have only a year to go to see whether the 0.3ºC warming over the decade will eventuate.


Four out of seven show a negative trend and the three positives are nowhere near the 0.3ºC predicted by Smith et al.
2014 will have to be Hell on Earth for their prediction to be realised.