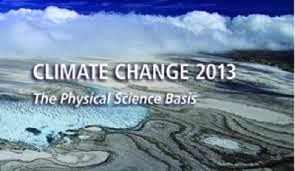 
I have studied, reviewed and appraised every one of the Reports of the Intergovernmental Panel on Climate Change. Since the First Report made it plain that constructive critics are unwelcome these have been very few. I believe I am the only one who has commented on every Report. They did not answer my comments and most were ignored. It is unpaid hard work.

Why have I done it? It has given me a valuable insight onto the operations of what I have slowly become convinced is a comprehensive international-based fraud, and an attack on genuine climate science. There are many who try to control the flames from  the dragon;s jaw. I believe in striking at the heart

My book  which  debunks the third Report is currently available on

http://www.multi-science.co.uk/greendelu.htm   and also on Amazon.com and and Abe Books

The Fifth, AR5  IPCC WGI (Science) Report has now been accepted but not approved in detail, so it is still incomplete. It is available at

The final  draft Report, dated 7 June 2013, of the Working  Group  I  contribution  to  the  IPCC  5th Assessment Report "Climate Change 2013: The Physical Science Basis" was accepted but not approved in detail by the 12th Session of Working Group   I and the 36th Session of the IPCC  on 26 September 2013 in Stockholm, Sweden. It consists of the full scientific and technical assessment  undertaken  by Working Group I.


The Report has to be read in conjunction with the document entitled “Climate Change 2013: The Physical Science Basis. Working  Group I   Contribution  to  the IPCC  5th Assessment  Report  - Changes to  the underlying  Scientific/Technical Assessment” to ensure consistency with the approved  Summary for Policymakers (IPCC-XXVI/Doc.4) and presented to the Panel at its 36th Session.  This document lists the changes necessary to ensure consistency between the full Report and the Summary for Policymakers, which was approved  line-by-line by Working Group I and accepted  by the Panel at the above- mentioned Sessions. Before publication the Report will undergo final copy-editing as well as any error correction as necessary, consistent with the IPCC Protocol  for Addressing  Possible  Errors. Publication  of the Report is foreseen in January 2014”

We seem to have a repeat of the scandal that erupted with the Second Report where a discrepancy between the Summary for Policymakers and the main, approved Report had to be “corrected” so that it complied with the SPM by Ben Santer.

It is a very large volume and needs time to consider its implications fully. This Newsletter will deal with a few preliminary reactions.

Every page has the message “Do not Cite, Quote or Distribute”. I do not understand how they can do this with a publicly available document. The Second Draft has been leaked and if the Final Report has been launched publicly surely I have the right to quote it and discuss it.

It is certainly incomplete as we are not even told who the Editors are and there is no Introduction. You can get a picture of the front page

I have submitted comments on both drafts; 119 comments on the Second Draft. In the.earlier reports, not only were the comments confidential, they were secret and I never knew what had happened to them unless I tried to find evidence in the final report that they had taken notice of them.

With the last Report (No 4) somebody pulled the Official Information Act and they had to publish the comments and their replies. Most of mine were rejected out of hand.

Let us start with the Summary for Policymakers.

As I have pointed out many times, this is actually a Summary BY Policymakers because it is approved by anonymous Government Representatives who actually control the entire Report. They approve this Summary line by line, dictated to, in this case, 37 “Drafting Authors”. They also have “Contributing Drafting Authors” and the number of these has increased from 15 in the Second Draft to 37. They have also increased the number of pages from 26 to 36.

In the Introduction  they make this statement:-


‘1 In this Summary for Policymakers, the following summary terms are used to describe the available evidence: limited, medium, or robust; and for the degree of agreement: low, medium, or high. A level of confidence is expressed using five qualifiers: very low, low, medium, high, and very high, and typeset in italics, e.g., medium confidence. For a given evidence and agreement statement, different confidence levels can be assigned, but increasing levels of evidence and degrees of agreement are correlated with increasing confidence

This is the elaborate system they have established to compensate for their inability to provide any evidence for  their prescribed task, the predominate influence of human emissions of greenhouse gases on the climate. They have found that if they express their “confidence” that this proposition is true in these elaborate terms it will somehow replace actual evidence

They have found it to be necessary to raise this level of “confidence” with each report even when it becomes more and more obvious that their models do not work.

This report is infested with claims that almost everything is "Very Likely" - a term which indicates 95% certainty. The last 5% still has to left, just in case one day they will have to swallow their words.

My comment was as follows  “These are merely the opinions of biased "experts". They are not based on  scientific studies”.

In the First Paragraph of the SPM is the following confession:


“The Working Group I contribution to the IPCC's Fifth Assessment Report (AR5) considers new evidence of climate change based on many independent scientific analyses from observations of the climate system, paleoclimate archives, theoretical studies of climate processes and simulations using climate models”


“This paragraph is confused. You seem to have made a lot of "observations" which show what we all know already, that the climate is "changing", but "evidence" that you can explain it is dependent on "simulations", and "projections" from untested models, neither of which constitute "evidence" while they are incapable of successful future prediction.

Note that they are not temperatures but “anomalies”

My comment was “Your claim that you have measured "globally averaged" near surface: temperature is untrue. In order to do so it would be necessary to distribute thermometers randomly over the entire surface of the earth, including oceans deserts and forests. The "global surface temperature anomaly" which you quote is very far from such a scientifically based system as it consists of multiple averages based on unrepresentative samples from non standardized condions which have very large uncertainties and biases which greatly exceed the supposed :warming,: and are never estimated.” 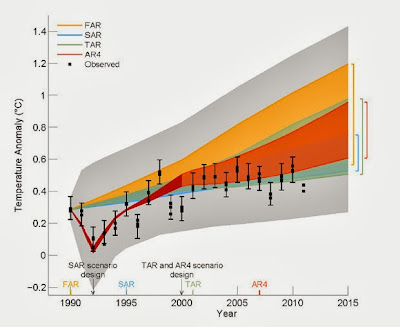 Has been replaced with this one 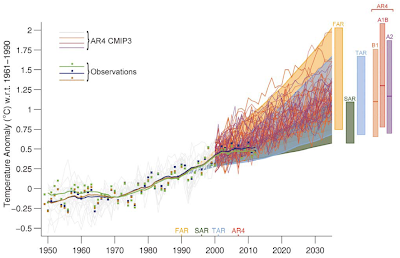 which does not look quite so bad. They have changed the starting date and replaced the “error bands” on the individual points with much larger error bands for the models, based on the “projections” of the previous IPCC Reports.

They tend to end several plots in the year 2000 when it did not seem so bad and they like using “Decadal” temperatures to cover up their obvious failure to “project” temperatures for the past 17 years.

Steve McIntyre has shown that they have left out information from the last report, at
http://climateaudit.org/2013/09/30/ipcc-disappears-the-discrepancy/

Here is another one, from Frequently asked Question No 1.1 which shows their estimates of uncertainty 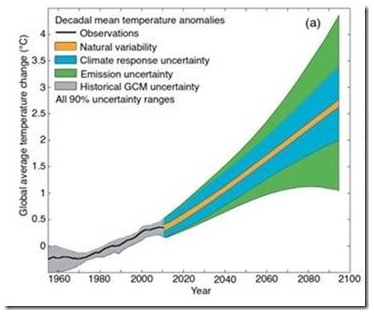 These estimates of “uncertainty” should be compared with their new estimates for global energy distribution.


THE MODELS ARE WORTHLESS


My comments on this diagram were


“Sheer speculation based on an absurd misinterpretation of  the earth's energy supply, distorted to pretend that it is entirely controlled by radiation exchanges, The earth's energy is received by the sun only by day. The absorbed heat is used by all organisms, partly removed by  convection and evaporation and the remainder radiated to the exhaust (space) from the earth, and the heated atmosphere. There is no evidence that the so-called “greenhouse gases" play any part in this and models based on your theory cannot  currently improve on conventional weather forecasters”


Early versions of this diagram gave apparently constant energy figures. This is the same as an improved figure from the Second Draft, but they have now changed several of the figures. But, for the first time they have given uncertainty figures for each energy estimate.

They also admit that there is an energy imbalance. If you consider the ranges given for the various components you come up with the possible range of  the current imbalance of 0.6Wm-2  between + 40 Wm-2  to – 15 Wm-2.

My comments were as follows:


“The "Energy Budget" Is a joke.. The energy of the earth or at any place on it is never :"balanced" and the figures given in the diagram are all complex averages from skewed variability distributions of poorly characterised averages., Your current version even ventures to give (unbelievable) uncertainties which immediately cast doubt on any supposed "surplus".  Your models are thus calculating a supposed increase above a moving target. The model does not show what happens when the energy is received, by day only, in variable amounts, on varying surfaces, and it omits the energy which is used to make life possible on earth, or what really happens to it before the residue is radiated outwards”

The “projections” of the models all assume that there is a balance between input and output energy before they can assess the influence of greenhouse gas increases.

Their current estimate of 2.3Wm-2 (1.33 to 3.33) for the radiative forcing caused by greenhouse gas increases since 1750 is well below the admitted uncertainties of this model. The maximum forcing “expected” in 2100 of nearly 8Wm-2 is still smaller than the possible extra that could come from the model.  It is therefore worthless as a means of estimating the influence of increases in greenhouse gases. It does not seem to be worth arguing about different values of “climate sensitivity” as they are all much less than the uncertainties.

The  models do not estimate “natural variability” but this is invariably invoked whenever, as now, that the models fail. Nobody seems to have understood that “warming” could just as easily be attributed either to natural variability or to  a change in the estimates of parameters in the above diagram.

This is enough for now. Further information as we go......