Can a Physicist be a politician? 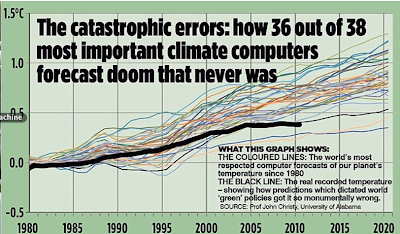 Mike Stopa is a Republican running for U.S. Congress in Massachusetts 5th district in the special election to replace Ed Markey. Mike is also a Harvard University Physics Professor.

Mike says that
However the physics of water in the atmosphere is not very well understood, nor is the physics of the formation of clouds. There are also natural variations to the temperature that the IPCC has not (fully) taken into account - (Why would they? Their brief was to find CO2 the culprit - ED) including the forcing factor of radiation; the variation of the temperature due to ocean currents.

The temperature of the globe has not increased for 15 years. Why didn't the IPCC predict this total pause in global warming?

Let me tell you quickly what I think about global warming. Global warming is not a hoax; it is a hysteria. It is not that there are not scientist doing good work. It is that people have gone on a quest, they have searched for a catastrophe. Someone has got to sort this out and say clearly 'if we're historical about this, we are going to spend ourselves into oblivion. Then if anything really happens we won't be up to deal with it.


The World could use more scientists in politics instead of false profits like Al Gore sprouting voodoo science.

Of Renewables, using the failed company Evergreen as an example, made manufacture-susidised products that also had to have consumer subsidies for consumers to buy them. Without subsidies they can't compete on the market place.

Q: Why are we doing this?

A: Well, people are getting rich of it.

Q: Where are all these people who got rich on renewable energy?

A: (Pointing at empty Evergreen Factory) They're Gone!