Adam Bandt is a Bastard. 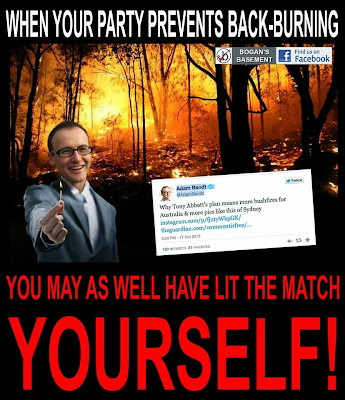 Nicola Roxon reckons Kevin Rudd is a bastard. She justifies the act of bastardry by the ALP in removing Rudd as justified because he was a bastard. She lists his myriad and manifest faults such egoism, disorganisation, having a vicious tongue and temper, being contemptuous etc.

Of course Roxon knew all this before she and her fellow ALP members restored a man who they despised and who they knew was a megalomaniacal incompetent. Her and the rest of the ALP’s contempt for the Australian public is well demonstrated by that act; to save their electoral skins they would reinstate a man who all but destroyed the Australian economy and left ongoing social and expensive problems such as the NBN, the boat people and a spurious carbon tax which will take the Abbott government a term to resolve, even if they have the political will to do so.

In short not only is Rudd a bastard by Roxon’s standards but she and the rest of the ALP are as well.

Rudd’s and Gillard’s bastard governments were kept in power by the Greens. The Greens knew the damage Rudd and Gillard were doing to the Australian economy and society but colluded with that state of affairs so they could stay in power and continue to have their pernicious policies implemented.

The fruits, rotten to the core, of one of the Green policies has been apparent during the latest Spring bushfires.

Bandt has declared these bushfires are the result of man-made global warming [AGW] and that Abbott’s efforts to remove the insidious carbon tax will cause more and worse bushfires.

Bandt’s comments are reminiscent of what his former leader Bob Brown said immediately after the 2009 Victorian bushfires. For Brown and other Green commentators the bushfires were evidence that AGW was real.

The complicity of Green policy in exacerbating the severity of the bushfires was never acknowledged by Brown or other Green advocates and supporters including Bandt.

Green policy is against hazard reduction by controlled pre-bushfire season burning of accumulated undergrowth [back-burning]. This undergrowth if not removed creates a literal powder-keg where normal fire movement is vastly accelerated by explosions of the accumulated fire material.
Since the Australian bush is a product of thousands of years of aboriginal fire-stick farming where fires are mild in intensity allowing rapid regrowth of plants and trees and survival of animals the much greater intensity of Green fires destroys both forest and wild-life allowing no regeneration.

There is no doubt the Victorian government of the time had permitted the insidious effect of Green ideology to permeate its back-burning programs. Less than 1% of bush in Victoria had been subject to back-burning.

The situation was even worse in NSW with the ALP government only undertaking 0.4% back-burning.

In Tasmania the then Green government spent only $900000 of a allocate budget of $27.7 million on back-burning. The effect of the devastating January 2013 fires in Tasmania can therefore be largely sheeted home to the derelict actions of the government as dictated by Green policies.

The Teague Report which was written as a response to the Victorian bush-fires strongly recommended back-burning and hazard reduction to control bush-fire damage [see recommendations 55-59].

Despite this it is plain the Greens do not care about bush-fire mitigation but are concerned only with opportunistically using the inevitable bush-fires in this dry country as excuses for their support of the failed theory of AGW. This is despite the clear damage their policies do to the forests and wildlife of Australia. This is an amazing indictment and indication that the Greens do not care about nature but are concerned with power plays and politicising the tragedy of bushfires.

They are like vultures waiting for these catastrophes to happen and using the damage their own policies cause to justify those same policies.

In Roxon’s terminology they are bastards.