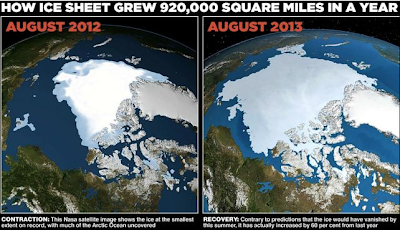 The Denying Alarmists are tripping over themselves. First of all they predicted that the Arctic would be Ice Free by 2013 ie now.

Scientists in the US have presented one of the most dramatic forecasts yet for the disappearance of Arctic sea ice.Their latest modelling studies indicate northern polar waters could be ice-free in summers within just 5-6 years. Professor Wieslaw Maslowski told an American Geophysical Union meeting that previous projections had underestimated the processes now driving ice loss.

"Our projection of 2013 for the removal of ice in summer is not accounting for the last two minima, in 2005 and 2007," the researcher from the Naval Postgraduate School, Monterey, California, explained to the BBC.

"So given that fact, you can argue that may be our projection of 2013 is already too conservative."

This was quoted by Al Gore in his Nobel Peace Prize acceptance speech.

Even one year ago, the alarmists were predicting meltdown:

So, what happened? As shown above with NASA's images, the Ice Sheet grew 920,000 square miles in a year.

How have the alarmists treated this news. Well, some have been found to be deniers:

eg Denier Dana Nuccitelli's graph  reproduced by the Guardian and  on Neurologica blog shows no gain at all in 2013: 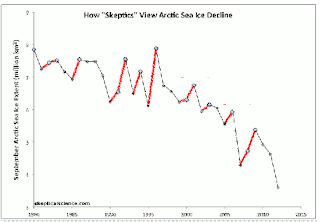 and yet, as James Taylor points out (with his tongue firmly planted in his cheek): (link)

These hallucinations are strikingly similar to when we erroneously believe alarmists warned us about less snowfall, more hurricanes, shrinking Antarctic sea ice, the Gulf Stream shutting down, etc. When the earth’s climate reacts exactly in the opposite manner as predicted by global warming alarmists, they pretend they never made such scary predictions in the first place. 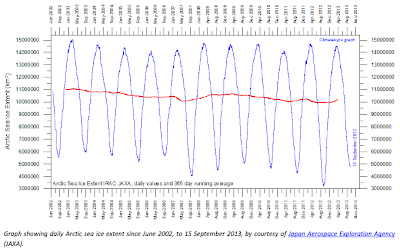