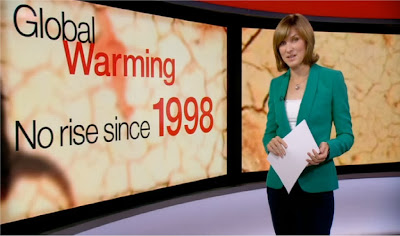 Global Warming
No rise since 1998

Will Australia see the Alarmist ABC admit that the warming has stalled?

Also from the BBC:

Scientists are more certain than ever that greenhouse gases from human activities are heating the planet, the head of the UN's climate panel says.

Rajendra Pachauri made the comments in an interview with BBC News.

The panel is due to deliver its latest report on the state of the climate later this week in Stockholm, Sweden.

Its last report was criticised after an error on glaciers unveiled other flaws, but Prof Pachauri said procedures had been reformed and strengthened.

He also dismissed suggestions of a slowdown in global warming.

"There’s definitely an increase in our belief that climate change is taking place and that human beings are responsible,” he told me.

"I don't think there is a slowdown (in the rate of temperature increase).

Why did Pachauri previously admit the pause in warming?

THE UN's climate change chief, Rajendra Pachauri, has acknowledged a 17-year pause in global temperature rises, confirmed recently by Britain's Met Office, but said it would need to last "30 to 40 years at least" to break the long-term global warming trend.

Dr Pachauri, the chairman of the UN's Intergovernmental Panel on Climate Change, said that open discussion about controversial science and politically incorrect views was an essential part of tackling climate change.

However, as Donna Laframboise points out on her "No Frakking Consensus:"


The IPCC is, first and foremost, a UN bureaucracy. Since it is the nature of bureaucracies to pursue their own agendas, science has never been the driving force at the IPCC.

History will not be kind to this organization. The IPCC is a case study in how a UN body took a particular set of political and philosophical beliefs about humanity’s interaction with the environment – and dressed them up as science.

Also History will not be kind to the alarmist ABC, nor the journalists of the mainstream media who have lost the journalists' main tool of scepticism. Nor indeed the IPCC AR5 if they try to hide the stall in warming: From Der Spiegel -

This is a difficult state of affairs for the Intergovernmental Panel on Climate Change (IPCC), which will release its next assessment report on global warming on Friday, Sept. 27.

Germany's highest-ranking climate researcher, physicist Jochem Marotzke, director of the Max Planck Institute for Meteorology, in Hamburg, is fighting back against this refusal to face facts. Marotzke, who is also president of the German Climate Consortium and Germany's top scientific representative in Stockholm, promises, "We will address this subject head-on." The IPCC, he says, must engage in discussion about the standstill in temperature rise.

Marotzke calls the claim that a temperature plateau isn't significant until it has lasted for over 30 years unscientific. "Thirty years is an arbitrarily selected number," he says. "Some climate phenomena occur on a shorter timescale, some on a longer one." Climate researchers, Marotzke adds, have an obligation not to environmental policy but to the truth. "That obligates us to clearly state the uncertainties in our predictions as well," he says.

Let's hope that Pachauri's about face on the temperature pauses is not an indication that the IPCC are going to ignore their "obligation to the truth."