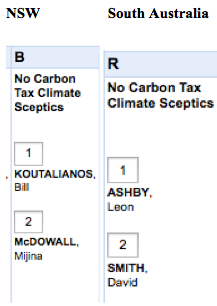 All Political Parties put in their party preference voting tickets which can be found on the Australian Electoral Commission website. I sincerely urge for a No. 1 Vote for the NO CARBON TAX Climate Sceptics party to help rid Australia of the Green Madness of the falsified Catastrophic Global Warming Hypothesis.


Under the preference system, we at the NO CARBON TAX Climate Sceptics (NCTCS) had to do preference deals with other parties to improve our chances. If you agree with our party's preference distribution, the easiest way is to place 1 above the line (Or for your own below the line preference order see later in this post.)

Two facts stand out as guiding beacons in this election:

Therefore the first rule for anyone supporting a return to Carbon Sense is this:

Three other facts are relevant:

The Senate ballot paper will be daunting. The easy option is to follow the how-to-vote from the LNP and you will help them, warts and all. At least that should tip the carbon-taxing ALP/Green coalition out of office.

We do not recommend that option. Use the power of the preferential voting system to send a real message to Parliament. Look carefully at all parties and candidates on offer and rank them, starting with number 1, and numbering all squares. Take care – you must number every square for your vote to be valid. Even if your number 1 does not get elected, the votes that go their way will be noted, and your vote will flow onto your number 2, and so on until someone accumulates a winning margin. Your vote is never wasted and never goes to someone you detest.

We have not tried to investigate all candidates or all parties, especially as there are so many new parties. So when you start numbering, stick to those you know to be opposed to the silly war on carbon dioxide, the gas of life. Make sure you do NOT number any ALP/Green candidate before you number all the known climate sceptics AND the LNP. Put all Greens dead last. If none of the good minor candidates get enough votes or preferences to win, at least your vote will not accidentally help a Green to get elected.

Here is our rough ranking of parties whose climate policies we know something about:

1.    OPPOSED TO THE CARBON TAX and THE EMISSIONS TRADING SCHEME and hostile to most of the wasteful climate industry bureaucracy:

2.    OPPOSED TO THE CARBON TAX and THE EMISSIONS TRADING SCHEME but supporting some other pet scheme that will benefit their supporters at our expense (like “Direct Action”):

3.    NOT SURE of these, but probably hostile to at least some of the carbon tax climate agenda:

4.    PUT ALL THE REST LATER, in whatever order you like, unless you know that their policies on carbon are sensible. Make sure every Green candidate, every climate zealot and every global warming alarmist in every party is at the bottom of your numbered preference list and is sent to the wilderness.

Don’t waste time or energy arguing with dedicated greens or sending them material. They must all be replaced. Throw our Carbon Sense seeds in fertile fields, not in the barren desert.

More advice from a friend:

Case Smit, Co-Founder of the Galileo Movement, has advised us of a great new aid for allocating your own preferences in the Senate.

I’ve just used the facility on https://www.clueyvoter.com/  to rank my personal preferences on the Senate paper; it works beautifully and I recommend that you broadcast this web site to everyone you think might like to put the NO CARBON TAX Climate Sceptics Party high up on the ballot.

Without this assistance, almost nobody would be game to through the ballot paper below the line.

Thanks Case! I tried it and it works well. You can even adjust it, tweek it if you want.


Cluey Voter makes it easy to vote "below the line" to really make your vote count.