Getting their Just Deserts!

National Geographic has an item by James Owen titled: 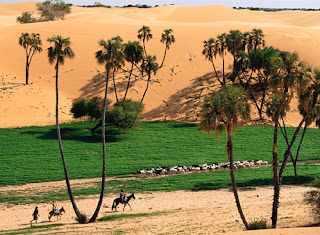 Desertification, drought, and despair—that's what global warming has in store for much of Africa. Or so we hear.

Emerging evidence is painting a very different scenario, one in which rising temperatures could benefit millions of Africans in the driest parts of the continent.

Scientists are now seeing signals that the Sahara desert and surrounding regions are greening due to increasing rainfall.

If sustained, these rains could revitalize drought-ravaged regions, reclaiming them for farming communities.

This desert-shrinking trend is supported by climate models, which predict a return to conditions that turned the Sahara into a lush savanna some 12,000 years ago.