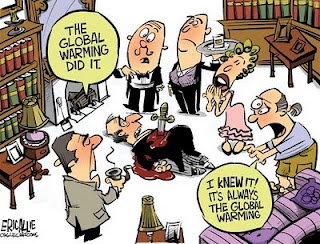 Recently, three researchers at the University of California, Berkeley, had a study published that claimed that a “substantial” correlation between violence and climate change could be made.

They cited sixty studies from around the world that, according to a BBC World Service article, demonstrated that “even small changes in temperature or rainfall correlated with a rise in assaults, rapes, and murders, as well as group conflicts and war.”

Apparently they missed the data on World War II’s Battle of the Bulge or the siege of Stalingrad, both of which were fought in freezing weather. Earlier, Napoleon ran into a similar problem when he wanted to conquer Russia.

We have now reached a point in the Great Global Warming Hoax where pure absurdity is the norm for claims made on behalf of a warming cycle that ended around 1996.

In a Washington Times January 17 commentary, Patrick J. Michaels, director of the Cato Institute’s Center for the Study of Science, wrote, “My greener friends are increasingly troubled by the lack of a rise in recent global surface temperatures. Using monthly data measured as the departure from long-term averages, there’s been no significant warming trend since the fall of 1996. In other words, we are now in our 17th year of flat temperatures.”

Citing the usual scientific data involved, Michaels wrote, “It’s a pretty good bet that we are going to go nearly a quarter of a century without warming.”

Much of the kind of idiotic “scientific research” with which the public has been inundated for decades has been the result of the pursuit of funding that involves “professional advancement”, noted Michaels, and which is “particularly dependent upon a certain view”—proving that global warming is real despite all the evidence to the contrary. Claiming that it is causing a rise of violence around the world is idiotic.

Commenting on the Cal-Berkeley study, James M. Taylor, the Heartland Institute’s editor of Environment & Climate News, noted that the three researchers “claim to apply expert principles of ‘archaeology, criminology, economics, geography, history, political science, and psychology’ in their paper” despite the fact that they ”share the same limited background in economics” to claim such expertise.

The only place you will find “proof” of global warming these days is in computer models.

Too often they are those used by the National Oceanic and Atmospheric Administration and those at NASA, both government entities that are mindful that they better toe the party line if they want their budget requests fulfilled. Despite having the best satellites and computer models available, the National Weather Service would not guarantee its predictions more than three days out and surely not more than a week or two.

It is unfortunate that we have a President who keeps repeating the same false claims about “climate change”—the new name for global warming—despite the fact that they have been disputed and abandoned by thousands of scientists around the world. Worse, claims about “carbon pollution” are being used by the Environmental Protection Agency and other government departments to justify the war on coal in particular and hydrocarbon fuels in general.

Some elements of the press such as the BBC are unwilling to abandon the global warming hoax. This means that the search for new scary headlines with which to sell newspapers and magazines, or increase ratings on the evening news will lead to claims about dramatically rising sea levels or, as Michaels predicts, “acid oceans.”

It is all garbage and the real threat is the billions in taxpayer dollars that are being wasted on so-called “climate change” research or the tons of regulations being written to support the strangulation of the nation’s economy in the name of air and water pollution. We have clean air. We have clean water. We need jobs.