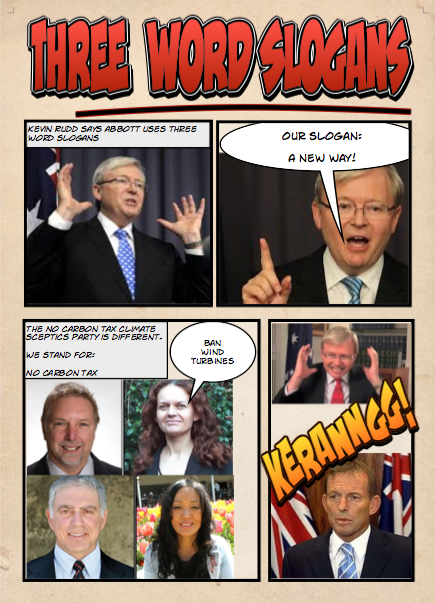 When he called the election, Mr Rudd said: "Three-word slogans won't solve complex problems. They never have. And they never will."

He then announced Labor's new slogan: "a new way". (Courier Mail) Can he promise a new way after Labor's six years at the helm?

Rudd is still pushing the flawed Anthropogenic Global Warming (AGW) barrowl (link)
Tony Abbott, once said when referring to the "science" behind man-made global warming, that it was crap. Nick Minchin knows that the science is faulty but, in a long phone call to Tony Abbott after Abbot's remarks, convinced him that voting for the ETS would fracture the Coalition and split the Liberal Party.(link) So, to mix metaphors, the Libs are sitting on the fence in the middle of the road.

A vote for the NO CARBON TAX Climate Sceptics in the Senate is a vote against taxpayers money being wasted on loopy green policies.