The Social media took exception when Sean Garlick mentioned that the tax on Carbon Dioxide was costing his business $1000 per month. They put out false pictures like the one at right (countered by the one below.)

They made disgusting inaccurate comments on their Facebook Page:


Oh dear.......lying in support of Abbott was silly......but underestimating the political savvy of your customers was was downright stupid !! Actions have consequences.


You've sold your soul to the devil Carlo's Pies. I shall never buy your products again. How low can you go? Shame on you.

Oh dear! This one will never buy the pies again? This one doesn't even know the company's name.


YUK! Thanks for letting us know - always easier to reject poor quality produce when you have first hand advice on the source of the taint.

Don't knock it if you haven't tried it.

You've lost my business. I'll make sure to spread the word.

On Chris Smith's afternoon radio show on 2GB, Sean Garlick has countered with the fact that his latest electricity account has an Environmental and Carbon Charges of $811.56 for the month and then there is the rise in the cost of refrigerant.


To all the doubters out there, here is our electricity bill for the month of March totalling $5,498.01.

Please note the Environmental and Carbon Charges of $811.56 which makes up 14% of our electricity bill. 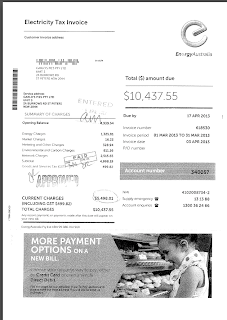 The introduction of the carbon tax on refrigerants from 1 July this year will have a significant impact on the industry, although perhaps not in the fashion the Government had intended. The industry will be forced to digest significant cost increases with limited options to reduce or minimise these costs.

Perhaps the evil social twitards should concentrate on some of King Rudd's Porkies: