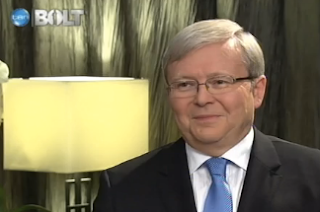 In the campaign leading up to his first incarnation as Prime Minister Kevin Rudd described "Climate Change" as ""the greatest moral, economic and social challenge of our time." Why is it, then that he is so ignorant on "climate change." In an interview with Andrew Bolt, he displayed amazing ignorance on 'climate change.' Interview link.


RUDD: The International Panel of Climate Change scientists that you just referred to contains within it 4,000 scientists

No, PM, it is NOT the International Panel, it is the Intergovernmental Panel. It is a political body and not a scientific one.

John McLean examined the IPCC's 4AR and found the working group on "Climate change" found "just 5 reviewers endorsed the chapter but most of those had potential vested interests." (link)


The IPCC leads us to believe that over 600 impartial reviewers diligently examined chapter 9 and a very high proportion agreed with its findings. It is difficult to see how this impression could be much further from the truth - 7 reviewers who were probably impartial, only 2 of whom made more than one comment; just 5 reviewers endorsed the chapter but most of those had potential vested interests.

Rudd also referred to the CSIRO.

The second source of authority, as the Prime Minister of Australia, is the CSIRO. And the CSIRO, which is a body which has existed in this country since the 1930s, analyses climate change science

To quote Des Moore of the Institute for Private Enterprise:


Rudd claims the CSIRO supports taking action (to reduce emissions) because failure to do so will “see an increase in extreme weather events and ... an increase in drought events” in certain parts of Australia. Leaving aside analytical errors in this area made  by CSIRO and it’s now obvious warmist bias, Rudd seems unaware of the IPCC report playing down the risk of extreme weather events and giving increased weight to the pursuit of adaptive policies.

Perhaps the PM should read Graham Williamson's book on the CSIRO titled "Loss of Independence and Integrity." See also: CSIR Oh! Your victims speak out!