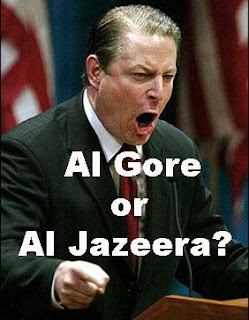 Of Al Gore, The Seattle Times say that: (link)

Detractors see Gore as a limousine liberal, tiresome pedant and climate alarmist who lives a jet-setting, carbon-profligate lifestyle while preaching asceticism for everyone else.

In January, the Current TV network, which he helped to start in 2004, was sold to Qatari-owned Al Jazeera Satellite Network for about $500 million. After debt, he grossed an estimated $70 million for his 20 percent stake, according to people familiar with the transaction.

Two weeks later, Gore exercised options, at $7.48 a share, on 59,000 shares of Apple Inc. stock that he’d been granted for serving on the Cupertino, California-based company’s board since 2003. On paper, it was about a $30 million payday based on the company’s share price on the day he claimed the options.

According to the Guardian: (link)


Al-Jazeera English was set up in 2006 by the Arabic broadcaster of the same name and both are owned by the Qatari state.

Does that mean Al Gore sold out to BigOil? Well, it was reported that the Network was sold in 2011 but, as the LA Times reported in January 2013:  (link)


Al Jazeera is partly owned by the royal family of Qatar, a strong U.S. ally that is also a hugely wealthy petro-dictatorship. In other words, after spending his post-presidential career exposing the evils of Big Oil and the havoc it's wreaking on the planet's climate, Gore's roughly $100 million in profit from the Current TV deal is figuratively dripping with carbon coffee. (emphasis added)

Gore has tried to answer this:


"Yeah, I understand it looks bad, but hey, Al Jazeera has covered the climate change issue better than any other channel."


It's a pretty lame explanation, not only because it doesn't really address the fact that Gore sold out to a huge oil interest but because it makes some unwarranted assumptions. If the world ever does become serious about a severe crackdown on oil use, Al Jazeera's Qatari owners might decide to add a little spin to the channel's climate coverage, or tone it down.