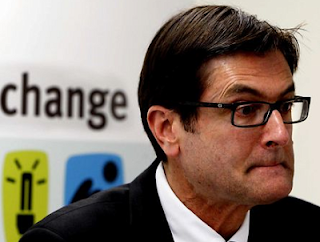 Australia's Minister for Climate Change has held a Press Conference reported by news media. He still link) uses the term "carbon price" even though PM Gillard admitted that it was a tax (link) and that tax is on carbon dioxide, not carbon.

From the Australian:
Carbon price will be revised: Combet

The carbon price is currently fixed at $23 a tonne and is paid by the biggest emitters, such as coal powered electricity stations.

In 2015, the price will move to a market-based mechanism and will be linked to the European emissions trading system.

Last year's budget forecast the price in 2015/16 would be $29 a tonne, but recent falls in the European market mean it will now be much lower.

Then Mr Combet said: "the government would take a "budget neutral approach" to the carbon price."How can it be budget neutral, Mr Combet, when you have promised billions of dollars to go overseas?

Prime Minister Julia Gillard's new tax will be used to allow Australia to meet its share of a $100 billion-a-year United Nations fund to transfer wealth from rich countries to help undeveloped nations adapt to global warming.


"It's doing what it was intended to do - it's cutting greenhouse gas emissions."

Is it really cutting Green House gas Emissions? Has the tax caused a crippling of Australia's economy with the knock-on effect of reducing production and commerce thereby  reducing emissions?


"Labor's carbon tax was deliberately aimed at reducing industrial activity and hurting Australian manufacturing and jobs, and now they are planning to dump their inadequate and pathetic compensation for such damage."

While Australian businesses are paying a carbon tax that is to rise to $29 per tonne in the next two years, the ABC reported (link)


Carbon permits dropped to as little as 2.63 euros ($3.34) a tonne, and German power prices for next year fell to their lowest level since 2007.


Everyone join in and sing the song:

"You're so Wrong, Greg Combet."